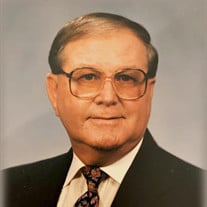 A Mass of Christian Burial will be held on Tuesday, February 22, 2022 at 1:30 PM in Sts. Peter & Paul Catholic Church in Scott for Perjice "Bud" Boudreaux, Sr., 90, who went home to be with Jesus on Saturday, February 19, 2022 at Lady of the Oaks Retirement Manor in Lafayette. The Boudreaux family will receive guests in Martin & Castille's SCOTT location on Tuesday, February 22, 2022 from 9:00 AM until time of services. A Rosary will be prayed on Tuesday, February 22, 2022 at 11:00 AM in Martin & Castille Funeral Home of SCOTT. Interment will be in Sts. Peter & Paul Cemetery. Reverend Mark Derise, Pastor of Sts. Peter & Paul Catholic Church, will be the Celebrant of the Mass. Survivors include his daughter, Charlene Richardson and her husband Charlie; his sons, Sammy Boudreaux and his wife Linda and Perjice Boudreaux, Jr; five grandchildren, Shane, Lance and Vance Boudreaux, Chantelle and Cory Duhon; fourteen great-grandchildren, Grant Maxwell, Jill, Amy, Alyssa, Abigail, and Peyton Boudreaux, Jessi Granger, Bryce, Hunter, Logan and Landon Roseberry, Gabrielle and Gaven Lantia and Hayden Duhon; four great-great grandchildren, Preslee, Grayson, Sophia and Rhett Roseberry; and one sister-in-law, Dorothy Boudreaux. He was preceded in death by his beloved wife of 70 years, Mary Cormier Boudreaux; his parents, Alpha and Alage Trahan Boudreaux; his in-laws, Oledia and Beulah Monceaux Cormier, Sr.; his brother, Jerry Boudreaux; his sister, Lillian Boudreaux Alleman; his son-in-law, Rhett Scott Thibodeaux; and his nephew, Waylon Boudreaux. Perjice Boudreaux, Sr. was born on July 14, 1931 in Leroy, Louisiana and was a resident of Rayne and Lafayette for most of his life. "Bud", as he was known to family and friends, was a Veteran of military service proudly serving his country as a Corporal in the United States Army during the Korean Conflict. He and his wife owned Boud's Lounge for many years. He also worked as a car salesman for many years before his retirement. Following retirement he was employed at Limousines Ltd. for several years. He was very dedicated to his job and was a perfectionist at heart. Mr. Boudreaux was a parishioner of St. Jules Catholic Church and also a member of Lady of the Oaks Retreat House in Grand Coteau. He will be dearly missed by all who knew and loved him. Upholding the honor of pallbearers will be his grandsons, Shane Boudreaux, Lance Boudreaux, Vance Boudreaux, and his great grandsons, Bryce Roseberry Hunter Roseberry and Hayden Duhon. Honorary Pallbearers will be his grandson, Cory Duhon, and great grandsons, Grant Maxwell, Logan Roseberry, Landon Roseberry and Gaven Lantia. A heartfelt appreciation is extended by the Boudreaux, Sr. family to the nurses, staff and doctors of Lady of the Oaks Retirement Manor and Lamb Hospice for their compassion and kindness given to Mr. Boudreaux and his family during their time of need. View the obituary and guestbook online at www.mourning.com Martin & Castille-SCOTT-802 Alfred St., Scott, LA 70583, 337-234-2320

The family of Perjice "Bud" Boudreaux, Sr. created this Life Tributes page to make it easy to share your memories.

A Mass of Christian Burial will be held on Tuesday, February...