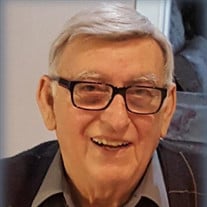 A Mass of Christian Burial will be held on Saturday, September 18, 2021 at 10:00 AM at Our Lady of Fatima Catholic Church in Lafayette for Philip Charles Scotola, age 90, who passed away peacefully surrounded by his family on Wednesday, September 15, 2021 at home in Lafayette. Entombment will be in Lafayette Memorial Park Peace Chapel Mausoleum. Reverend Millard Boyer will conduct the funeral services. Deacon Durk Viator will assist. Survivors include his two daughters, Tina Viator and her husband, Todd, of Broussard, and Phylis Scotola of Lafayette; one son, Perry Scotola of Lafayette; four grandsons, Philip, Gerard, Matthew (Elizabeth) and Christopher Viator; his great-grandson, Brannan Viator; and his 97 year old sister, Sadie Scotola. He was preceded in death by his beloved wife, JoAnn Lalumandier Scotola; one son, Philip S. Scotola; his parents, Salvatore "Sam" Scotola and Concetta Scotola; and his sisters, Salva Cascio (Vincent) and Rose Berggreen (Cole). Philip was a lifelong resident of Lafayette. He was the owner and operator of Philip's Wholesale Candy & Tobacco Company, Inc. in Lafayette. He was a former member and past president of the Italian American Club of Lafayette. Philip served his country honorably in the U.S. Army during the Korean War in Japan. He loved painting, mentoring young entrepreneurs in business, and spending time with his family. Pallbearers will be Perry Scotola, Todd Viator, Philip Viator, Gerard Viator, Matthew Viator, Christopher Viator, and Brannan Viator. Honorary Pallbearers will be Debra Albarado, Steve Cascio, Gregory Cascio, Charles Berggreen, Paul Berggreen, Joseph Piccione, Daniele Costanzo, and Jan Lalumandier. The family requests that visitation be observed in Martin & Castille's DOWNTOWN location on Friday from 5:00 PM to 8:00 PM and will continue on Saturday from 8:00 AM until time of services. A Rosary will be prayed on Friday at 6:30 PM in the funeral home by Rev. Donovan Labbe. Memorial contributions can be made in Mr. Philip Charles Scotola's name to the Community of Jesus Crucified, 103 Railroad Ave. St. Martinville, LA 70582, or the Carmelite Monastery, 1250 Carmel Drive, Lafayette, LA 70501. A heartfelt appreciation is extended by the Scotola family to all the employees of Philip's Wholesale, past and present, Dr. Michael Alexander and Marissa Guidry, NP, Dr. Juan Zeik, Dr. James Dobbs, and Dr. Jody Rosson, and all of Philip's caregivers. View the obituary and guestbook online at www.mourning.com Martin & Castille-DOWNTOWN-330 St. Landry St., Lafayette, LA 70506, 337-234-2311

A Mass of Christian Burial will be held on Saturday, September 18, 2021 at 10:00 AM at Our Lady of Fatima Catholic Church in Lafayette for Philip Charles Scotola, age 90, who passed away peacefully surrounded by his family on Wednesday, September... View Obituary & Service Information

The family of Philip Charles Scotola created this Life Tributes page to make it easy to share your memories.

A Mass of Christian Burial will be held on Saturday, September...

Send flowers to the Scotola family.