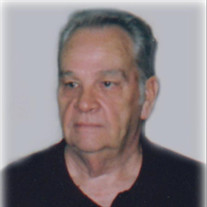 Funeral services will be held for Mr. Richard Johnson on Thursday, August 26, 2021 at 1:00 PM in La Chapelle de Martin and Castille, 330 St. Landry Street, Lafayette, LA, 70506. Richard Johnson passed away at the age of 81 on Monday, August 23, 2021 at his residence in Lafayette. The family requests that visitation be observed in Martin & Castille's DOWNTOWN location, 330 St. Landry Street, Lafayette, LA on Thursday, August 26, 2021 from 11:00 AM until time of services at 1:00 PM. Pastor Luther Burney will conduct the funeral services. Survivors include his loving wife of 62 years, Faye Edwards Johnson; his son, Richard Johnson Jr. and his wife Teresa; his son Ryan Johnson; his grandchildren, Andy Lewis, Lauren Johnson and Timothy Johnson; his sisters, Frances Dunn, Ann Perry, Faye Stone and Mary Carmouche; his brothers, Gerald Johnson, Kenneth Johnson and Donald Johnson; and numerous nieces and nephews. He was preceded in death by his parents, Mr. Felix Johnson and Mrs. Nona Rush Johnson; and his brother, Robert Johnson. Richard was born February 7, 1940 to Felix and Nona Ruth Johnson of Woodworth, LA. He grew up one of nine children and was a graduate of Lecompte High School class of 1958. After graduating high school, Richard proudly served in the United States Marine Corps during the Vietnam Conflict. He was a hard worker and enjoyed reading. He will be deeply missed by all who knew him. View the obituary and guestbook online at www.mourning.com Martin & Castille-DOWNTOWN-330 St. Landry St., Lafayette, LA 70506, 337-234-2311

The family of Richard Earl Johnson created this Life Tributes page to make it easy to share your memories.

Funeral services will be held for Mr. Richard Johnson on Thursday,...

Send flowers to the Johnson family.