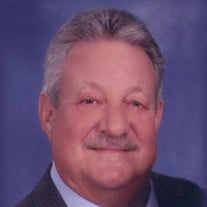 A Catholic Rite of Burial will be held for Mr. Richard Earl Reaux at 11:00 AM on Tuesday, September 28, 2021 in Martin & Castille's La Fleur de Lis Chapel at the SOUTHSIDE location. Richard was 75 when he passed away on Wednesday, September 22, 2021 in Lafayette. The family requests that visitation be observed in Martin & Castille's SOUTHSIDE location on Monday, September 27, 2021 from 4:00 PM to 8:00 PM and will continue on Tuesday, September 28, 2021 from 8:00 AM until time of services at 11:00 AM. A Rosary will be prayed in French by Mr. Voohries Short on Monday, September 27, 2021 at 6:00 PM in Martin & Castille Funeral Home SOUTHSIDE location. Entombment will be in Sacred Heart Mausoleum in Broussard. Reverend Casey Dugas, Parochial Vicar of Sacred Heart of Jesus Catholic Church in Broussard, will conduct the funeral services. A native of Broussard and resident of Lafayette, Louisiana for the past 20 years, Richard was a loving husband, father, grandfather and friend to many. He proudly served his country as a member of the U.S. Army Reserve. Growing up with horses at his family home, Richard eventually entered into the world of Quarter Horse Racing, purchasing his first horse from his brother Ronnie in 1985. Throughout his many years of racing, he won countless races alongside his trainer and longtime friend Donald Rubin. Richard and his wife Stacey began Sta Rich Racing, LLC at their horse farm in Opelousas in response to his success and growing number of horses. He was a lifetime member of the American Quarter Horse Association. In his professional life, Richard co-founded Bottom Hole Pressure, Inc., later Down Hole Pressure, Inc. While he enjoyed racing and was successful in his professional career, his greatest pride and personal accomplishment was being a husband, a Dad to “Casey Jones” and “Tutu” and eventual “Papa Rich” to his six grandchildren. Left behind to cherish his memory is his beloved wife of 35 years, Mrs. Stacey McBride Reaux; his son, Richard "Casey" Reaux and his wife, Alex of Bamberg, Germany; his daughter, Hailey Reaux Fontenot and her husband Joseph of Broussard; his grandchildren, Tyler James Reaux, Sydney Fiona Reaux, Cecilia Ann Fontenot, Jean-Luc Girouard Fontenot, Dominic Joseph Fontenot and Vincent Patrick Fontenot; his brother, Neil Pierre Reaux, Jr. and his wife Velma; his sister-in-law, Cindy Girouard Reaux and numerous nieces, nephews and god-children. He was preceded in death by his parents, Mr. Neil Pierre Reaux, Sr. and Mrs. Isabelle Girouard Reaux; his brother, Ronald "Ronnie" Charles Reaux; his brother, Malcolm "Mackie" Jules Reaux; his infant sister, Sybil Louise Reaux; his sister-in-law, Louise Larriviere Reaux and his nephew, Byron James Reaux. Pallbearers will be Joseph Fontenot, Ryan Reaux, Kurt Reaux, Donald Rubin, Mike Lamb and Rusty Lamb. Honorary Pallbearers will be Neil P. Reaux, Jr., Patrick D. McBride, Edward C. Lamb, Gervies J. Metrejean, George "Butch" Dore, and Marvin D. Fontenot. Memorial contributions can be made in Richard's name to St. Cecilia School, 302 West Main Street, Broussard, LA 70518 or you can click this link to donate, https://payit.nelnet.net/form/MdCO6xFH A heartfelt appreciation is extended by the Reaux family to Latoya Senegal of Quality of Life Care, Denise Prejean, Martha Espree, Kellee Charles, Alexia Harmon, Brittany Thomas and Iesha St. Julien. Also a very special thanks to the Cedar Crest Memory Care and Audubon Hospice staff for their compassionate care. View the obituary and guestbook online at www.mourning.com Martin & Castille-SOUTHSIDE-600 E. Farrel Rd., Lafayette, LA 70508, 337-984-2811

A Catholic Rite of Burial will be held for Mr. Richard Earl Reaux at 11:00 AM on Tuesday, September 28, 2021 in Martin & Castille's La Fleur de Lis Chapel at the SOUTHSIDE location. Richard was 75 when he passed away on Wednesday, September... View Obituary & Service Information

The family of Richard E. Reaux created this Life Tributes page to make it easy to share your memories.

A Catholic Rite of Burial will be held for Mr. Richard Earl Reaux...

Send flowers to the Reaux family.