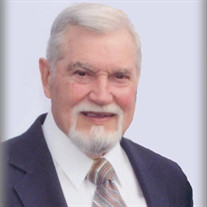 Funeral services will be held on Saturday, February 6, 2021 at 1:00 PM in Martin & Castille's La Fleur de Lis Chapel in Lafayette, for Robert Lee "R.L." Duhon, 80, who passed away on Wednesday, February 3, 2021 at his residence in Duson. Entombment will be in St. Basil Mausoleum in Judice. Reverend Steven LeBlanc, Pastor of St. Basil Catholic Church in Judice, will conduct the funeral services. Left to cherish his memory are his three daughters, Dawn Duhon Hargrave, Michelle Duhon Lightfoot and husband, Darren, and Sherie Duhon Campbell and husband, Drew; his step-son, Dean Breaux; his grandchildren, Kaleb Hargrave and wife, Jessie, Trey Benoit, Blake Benoit, Chase Benoit, Alex Benoit, Lance Benoit, Lauren Benoit, Colton Lightfoot, Sadie Campbell, and Marian Campbell; his great-grandchildren, Henry Hargrave, and James Robert Hargrave; his brothers, Bessyl Duhon and wife, Shirley, Dryden Duhon and wife, Emma, Sandy Duhon, and Allen Duhon and wife, Candy; his nieces and nephew, Paige Duhon Melton, James Barry, Dana Duhon Mount, and Nicolette Duhon Broussard. R.L. was preceded in death by his parents, Hector Duhon and Grace Stutes Duhon; his sister, Connie Duhon; and his brother-in-law, Dorman Haymon. R.L. was a 1958 graduate of Judice High School. After graduating, he enlisted in the U.S. Marine Corps and served until being honorably discharged in 1962. R.L. was proud to have served his country. Once his time in the military was complete, R.L. worked in the heating and cooling industry for several companies, later retiring after 25 years of service with Coburn's Supply. R.L. started as a musician with Bobby Page and the Riff Raffs and spent many years playing with multiple local bands, including his father Hector Duhon with Octa Clark and the Dixie Ramblers. R.L. collected many things, including coins, and enjoyed sharing his collections with visitors. R.L. loved life and was a friend to many. He was an excellent host and always had a beer to offer to his guests. Above all, he loved his family, especially his grandchildren and great-grandchildren. He was generous, thoughtful and would do anything for the ones he loved. His personality, sense of humor and compassion will be dearly missed. Pallbearers will be his grandsons, Kaleb Hargrave, Trey Benoit, Blake Benoit, Chase Benoit, Alex Benoit, and Lance Benoit. Honorary Pallbearers will be his brothers, Bessyl Duhon, Dryden Duhon, Sandy Duhon and Allen Duhon. The family requests that visitation be observed in Martin & Castille's SOUTHSIDE location on Saturday from 10:00 AM until time of service. View the obituary and guestbook online at www.mourning.com Martin & Castille-SOUTHSIDE-600 E. Farrel Rd., Lafayette, LA 70508, 337-984-2811

Funeral services will be held on Saturday, February 6, 2021 at 1:00 PM in Martin & Castille's La Fleur de Lis Chapel in Lafayette, for Robert Lee "R.L." Duhon, 80, who passed away on Wednesday, February 3, 2021 at his residence in Duson. Entombment... View Obituary & Service Information

The family of Robert Lee "R.L." Duhon created this Life Tributes page to make it easy to share your memories.