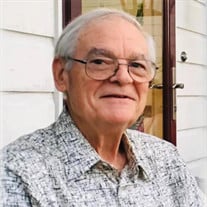 Funeral services will be held on Saturday, January 22, 2022 at 11:00 AM at Martin & Castille's DOWNTOWN location for Dr. Robert Reagan Johns, 80, who passed away on December 25, 2021. Inurnment will be at St. John Cemetery. Reverend Howard Blessing will conduct the funeral services. A longtime resident of Lafayette, Dr. Johns was the son of Mr. Harry Layton Johns and Maxine Caulffield Johns of New Orleans, Louisiana. He is survived by his wife, Ella Trappey Johns, daughter, Lily Johns Champagne and her husband Joel Champagne, son, Timothy Layton Johns and his wife Vicki L. Johns, daughter, Erin Johns Flanigan and her husband Thomas P. Flanigan, two grandchildren, Casey Flanigan and Ryan Flanigan, sister, Sylvia Schneller and her husband John Schneller, and brother, Steve Johns and his wife Donis Johns. He was preceded in death by his parents, previous wife, Virginia Discon Johns, and sister, Colleen Johns Randazzo. Dr. Johns attended Jesuit High School in New Orleans, Louisiana, where he played baseball and basketball, graduating in 1959. He attended Loyola University New Orleans where he was a member of Sigma Alpha Kappa fraternity, graduating in 1963. He attended LSU Medical School, graduating with honors. Dr. Johns began his medical career at Jackson Memorial Hospital in Miami, Florida, before serving his country for 3 years as a physician in the United States Army stationed in Germany where he achieved the rank of Major. Upon his return to the United States, Dr. Johns established a practice in Lafayette for 20 years. He continued his medical practice at Springfield Hospital in Springfield, Vermont, from 1992-2006 and returned to Lafayette in 2007 where he completed his medical career at Women's and Children's Hospital, from where he retired. Dr. Johns was a dedicated physician, delivering babies for more than 40 years. He is remembered for his compassion, sharp sense of humor, and love for classical music and opera. His greatest joys were supporting his children in their academics and athletic endeavors and traveling, most notably annual golf outings with family which ranged from California to Mexico and Ireland. The family requests that visitation be observed in Martin & Castille's DOWNTOWN location on Saturday from 10:00 AM until time of services. Heartfelt appreciation is extended by the Johns family to the entire staff at the Southwest Louisiana Veterans Home for their excellent care and compassion. In lieu of flowers, contributions can be made in Robert's name to the Alzheimer's Foundation of America or the Southwest Louisiana Veterans Home. View the guestbook online at www.mourning.com Martin & Castille- -330 St. Landry St., Lafayette, LA 70506, 337-234-2311.

Funeral services will be held on Saturday, January 22, 2022 at 11:00 AM at Martin & Castille's DOWNTOWN location for Dr. Robert Reagan Johns, 80, who passed away on December 25, 2021. Inurnment will be at St. John Cemetery. Reverend Howard... View Obituary & Service Information

The family of Dr. Robert Reagan Johns created this Life Tributes page to make it easy to share your memories.

Send flowers to the Johns family.