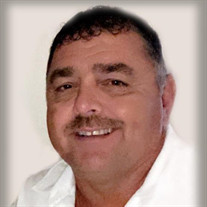 Funeral services will be held on Saturday, August 14, 2021 at 2:00 PM in Martin & Castille's La Fleur de Lis Chapel in Lafayette, for Rodney L. DeRouen, age 52, who passed away Tuesday morning, August 10, 2021 at Ochsner Lafayette General Medical Center. Entombment will be in St. Joseph Mausoleum in Milton. Deacon Cody Miller will conduct the funeral services. Survivors include his wife of 25 years, Tina Trahan DeRouen; his children, Trent DeRouen and his girlfriend Shyla Romero, Mitchell Broussard and his wife Nickey, and Tiffany Sonnier and her husband Cody; his father, Robert DeRouen, Sr.; his mother, Johnet Brantley and her husband John; his grandchildren, Alexis Broussard, Aubree Broussard, Amiyah Sonnier, Paislee Broussard, and Aleigha Sonnier; his sisters, Maxine Breaux and her husband David, and Yvonne Marcel and her husband Robby; his brothers, Robert Gaudet and his wife Kim, Preston Gary and his wife Sherryl, and Walter DeRouen and his wife Ellen; his mother-in-law, Mary Trahan; and several nieces and nephews. He was preceded in death by his father-in-law, Antoine Trahan; and one of his closest friends, Patrick Matte. Rodney was a native of New Iberia and a resident of Milton for the past 28 years. He was a crane supervisor with Concentric Pipe and Tools for the last 14 years. Rodney was a jack of all trades, very skilled in everything and would go out of his way to help anyone in need. He will be remembered for his "tell it like it is" personality, his strong work ethic, but most of all, his love for his wife and his family. He will be deeply missed by many and loved forever. Pallbearers will be Trent DeRouen, Mitchell Broussard, Stacey Albert, Robert Gaudet, Robby Marcel, and Anthony Trahan. The family requests that visitation be observed in Martin & Castille's SOUTHSIDE location on Friday from 10:00 AM to 9:00 PM and will continue on Saturday from 9:00 AM until time of services. A Rosary will be prayed by Deacon Cody Miller on Friday at 7:00 PM in the funeral home. A heartfelt appreciation is extended by the DeRouen family to the ICU nurses at Ochsner Lafayette General Medical Center for their compassionate care and support. View the obituary and guestbook online at www.mourning.com Martin & Castille-SOUTHSIDE-600 E. Farrel Rd., Lafayette, LA 70508, 337-984-2811

The family of Rodney L. DeRouen created this Life Tributes page to make it easy to share your memories.

Send flowers to the DeRouen family.