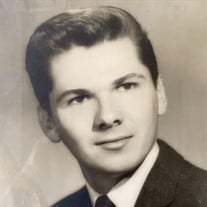 Funeral services will be held on Saturday, October 30, 2021 at 1:00 PM in St. Barnabas Episcopal Church, 400 Camellia Boulevard, Lafayette, Louisiana, 70508, for Roland Newton Pippin, Ph.D., 78, who died on Saturday, October 23, 2021 at Sanctuary at Passages Hospice in New Orleans, Louisiana. Interment will be in St. John Cemetery. Reverend Michael J. Bordelon, M.Div., Rector of St. Barnabas Episcopal Church, will conduct the funeral services. Survivors include his son, Bradford Warren Pippin of River Ridge, Bradford's wife, Monica and their two children, Delia Jane Pippin and Colin Bradford Pippin, as well as his nephews, nieces, and his brother, Roger Pippin. Roland was preceded in death by his wife of many years, Jane Bradford Pippin, his parents, Robert "Pip" and Lula Pippin of Baton Rouge, and his brothers, Robert "Bob" and Ronnie. Born on June 2, 1943, Roland Pippin was a native of Baton Rouge where he was raised with his three brothers. He graduated first from Louisiana College and pursued his Master's Degree at Stephen F. Austin. He was awarded his Doctorate at Virginia Tech. Roland met and married the love of his life, Jane Bradford, while teaching at what was then USL in Lafayette. They later moved to Natchitoches where they were members of Trinity Episcopal Church and where Roland taught Sociology at Northwestern University and volunteered in the community Pallbearers will be Bradford Pippin, Jim Henry, Ron Pippin, and Harold Pippin. Memorial contributions can be made in Roland Newton Pippin’s name to the American Cancer Society. View the obituary and guestbook online at www.mourning.com Martin & Castille-SOUTHSIDE-600 E. Farrel Rd., Lafayette, LA 70508, 337-984-2811

The family of Roland Newton Pippin, Ph.D. created this Life Tributes page to make it easy to share your memories.