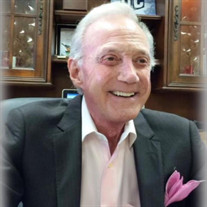 A Celebration of Life Service will be held for Roland "Rocky" Robin on Thursday, June 3, 2021 at 10:00 AM in La Chapelle de Martin & Castille in Lafayette. Rocky, as he was affectionately known, gained his wings at the age of 84 at his residence in Lafayette with his family by his side on Sunday, May 30, 2021. The family requests that the visitation be observed in Martin & Castille, 330 St. Landry Street, Lafayette, LA. 70506, on Wednesday, June 2, 2021 from 1:00 PM to 8:00 PM and will continue on Thursday from 8:00 AM until time of services. A recitation of the Rosary will be prayed by Brady LeBlanc on Wednesday, June 2, 2021 at 6:00 PM. Interment will be in St. Theresa Cemetery in Duson. Reverend Cedric Sonnier, Pastor of St. Mary Mother of the Church in Lafayette, will conduct the funeral services. Roland “Rocky” Robin was a Lafayette, LA native who graduated from Cathedral High School and Tulane University in Pre-Medicine. In 1958 he moved to Monroe, LA and attended Northeast Louisiana University where he acquired his Bachelor of Science Degree in Pharmacy. As a student, he began to produce, write, and promote music, which later became to be known as “Swamp Pop.” Rocky worked with artists such as Bobby Page, Roy Perkins, and John Fred. He appeared on stage with various groups and sang lead vocal and wrote “Lonely Man” and “What Did You Do Last Night”. He eventually formed N-Joy record label and one of the releases “Here I Stand,” beat a Rolling Stones song on Dick Clark’s American Bandstand. Other notable records he produced during the late 1950’s and early 1960’s are Randy and the Rockets’ “Let’s Do the Cajun Twist,” Huey Darby’s “Rockin’ Robin,” and John Fred and the Playboys’ “Boogie Children.” Rocky was indoctrinated into the Louisiana Hall of Fame in 1993. However, in the late 1960s, Rocky relinquished the music business to focus on his work as a pharmacist. Rocky was a Registered Pharmacist in the State of Louisiana for thirty-five years and he owned and operated a drug store called Medical Arts Pharmacy. He eventually left pharmaceutics to become a real estate developer. He was a licensed Real Estate Broker since 1963 and started a commercial real estate company named Roland L. Robin and Associates, Inc. From 1970 to 1978, he served as Vice President of Real Estate and Construction for Chart House, Inc., which owned 1,250 restaurants in 48 states and 4 countries. In 1978, he returned to his real estate firm, which was eventually named Derek Development Corporation, Inc., to develop office buildings, industrial parks, medical complexes, hospitals, nursing homes, outpatient surgery centers, and shopping centers. A few of Rocky’s developments he is most proud of are, Lake Charles Power Center, Doctor’s Hospital of Opelousas, Caffery Center, Evangeline Downs, North Pointe Development, Westgate 10 in Scott, The Village at River Ranch, Dillard Loop Shopping Center in Lake Charles, and Derek Plaza Shopping Center in Carencro. Throughout Rocky’s life, he was extremely passionate about cars and motorcycles, and he shared this passion with his children. He was bright, witty, and a great conversationalist; loved to talk and people loved to listen. He was charming to anyone who was nearby. Those who knew him will always remember he valued his freedom very much. He has wondered up lots of meaningful highways to satisfy a passing curiosity – all the while, learning from and sharing his experiences. He was a force of nature, and everyone cherishes the time spent with him. Left behind to cherish his memory are his daughters, Evelyn "Evy" R. McCain and her husband, Carl, and Stacie R. Sibille and her husband, Ronnie; his sons, Ryan L. Robin, Ritchey L. Robin and his wife, Melissa, and Terry O. Thomas and his wife, Mary Ann; his sister, Arlene Koffskey; his grandchildren, Casey Rockwell and her husband, Tommy, Chelsey Escoyne and her husband, Nick, Chasity Lavergne and her husband, Heath, Adam Robin and his wife, Ali, Audrey Robin, Ben Robin, Jacqueline Mary Francis Robin, Connor Thomas, Olivia Thomas, Sally Seymour, Edward Seymour IV, Brandon McCain and Payton McCain; fourteen great-grandchildren; three great-great-grandchildren and Nadra "Sue" Robin. Roland was preceded in death by his parents, Dudley V. Robin and Gladys "Toot" Washispack Robin; his son, Derek V. Robin, and his grandson, Jason D. Horaist. Upholding the honor of pallbearers will be Ryan L. Robin, Terry O. Thomas, Ritchey L. Robin, William "Carl" McCain, Ronnie A. Sibille, and Adam L. Robin. A heartfelt appreciation is extended by the Robin family to his caregivers, Jessica Beaube, Jordan Landry, and Becky Cortez for their compassionate care. View the obituary and guestbook online at www.mourning.com Martin & Castille-DOWNTOWN-330 St. Landry St., Lafayette, LA 70506, 337-234-2311

A Celebration of Life Service will be held for Roland "Rocky" Robin on Thursday, June 3, 2021 at 10:00 AM in La Chapelle de Martin & Castille in Lafayette. Rocky, as he was affectionately known, gained his wings at the age of 84 at his residence... View Obituary & Service Information

The family of Roland "Rocky" Robin created this Life Tributes page to make it easy to share your memories.

A Celebration of Life Service will be held for Roland &quot;Rocky&quot;...

Send flowers to the Robin family.