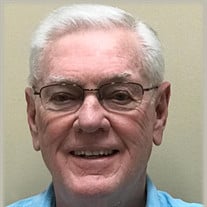 A Celebration of Life service will be held on Saturday, February 5, 2022 at 3:00 PM in Martin & Castille's La Fleur de Lis Chapel in Lafayette for Ronald Gordon Andrus, age 86, retired local businessman and Pastor who passed away peacefully at home with his loving family on Tuesday, February 1, 2022. The family requests that visitation be observed in Martin & Castille's SOUTHSIDE location on Saturday from 1:00 PM until time of services. Interment will be in Lafayette Memorial Park Cemetery, located at 2111 W. Pinhook Rd., Lafayette, LA. His brother-in-law, Pastor Phillip Thurmond of Dallas, TX, will conduct the service. Ronald Gordon Andrus was born in Lake Charles, Louisiana on March 13, 1935, and later moved with his family to Lafayette, Louisiana. He graduated from Lafayette High School in 1952 and received his Bachelor of Science degree in Business Administration from Southwestern Louisiana Institute (now UL) in 1956. He was extremely proud to have served in the United States Marine Corps Reserve - receiving the rank of Sergeant in 1959. After graduating from college, he joined his family in business in Lafayette. In 1968 he moved to Dallas and received recognition in the Wall Street Journal and Dallas Morning News for his innovative approach to building townhome developments in the Dallas area. Moving back to Lafayette in 1973, he continued in business eventually developing several subdivisions in the Lafayette area and was the founding owner of Ambassador Carwash. Ron's life was forever changed on Mardi Gras day of 1975 when he gave his life to Christ and became a born-again believer. He was passionately devoted to the Lord and began to feel a desire to go into ministry. In 1978, while working in business, he began serving as President of the Lafayette Chapter of Full Gospel Businessmen and over the next several years saw many souls impacted by the Lord. He was later appointed to Field Director for Louisiana as well as International Director for Full Gospel Businessmen. Entering full time ministry in 1988 at the age of 53, he, along with his wife, helped establish prophetic ministry in Lafayette as Pastor of The Lamb’s Glory Church which later became Restoration Life Church and Ministries located on Kaliste Saloom Road. After many years he retired to his home, with Phyllis, where he continued to mentor those seeking a deeper relationship with the Lord. He was an outdoorsman who loved both hunting and fishing and an avid LSU fan. As a passionate cook, there was nothing he could not create in the kitchen. His recipe “Ronnie’s Duck” is included in the popular “Talk About Good” cookbook. He loved preparing delicious meals for friends and family. If you were fortunate enough to meet Ronnie, you knew instantly you were in the presence of someone you could trust. Soft spoken, kind, a man that looked into your eyes as you talked and as he listened. His answers were honest - whether received or not. He spoke what he believed and believed what he spoke. If you were fortunate enough to be his friend, you had a man that you could always count on. He loved both Phyllis and his children deeply and often talked about how proud he was of them. He leaves to cherish his memory, his beloved wife of 52 years, Phyllis Thurmond Andrus; his children: Mark Andrus and his wife Betsy, Valerie LeBlanc and her husband Rickey, Mitchell Andrus and his wife Kay, Matthew Andrus and his wife Jennifer, Guy Andrus and his wife Tracey, Rachelle Johnson, and Valerie Vidrine and her husband Micah; his grandchildren: Scott Andrus, Christine Andrus, Jessica Mautner, Ryan Morrow and his wife Ashlee, Patrick Morrow, Elizabeth Andrus, Craig Andrus and his wife Leticia, Abby Geoffroy and her husband Tyler, Kristin Geoffroy and her husband Alex, Taylor Andrus, Aiden Andrus, Daniel Johnson and his wife Rachel, Caleb Johnson, Gabriel Johnson and Micah Vidrine II, as well as eight great grandchildren. He is also survived by his brother, Dwight W. Andrus, Jr., and his sister, Alonda Duos and her husband Peter. He was preceded in death by his parents, Dwight Wilbur Andrus Sr. and Yolande W. Arceneaux Andrus, and his grandson, Cameron Matthew Andrus. Pallbearers will be his grandsons, Craig Andrus, Ryan Morrow, Daniel Johnson, Gabriel Johnson, Micah Vidrine II, and close friend Robert Menard. A heartfelt appreciation is extended by the Andrus family to Ron's loving caregivers: Allison Prince, Shamara Kelly and Lekisha Fuselier, and also Katie Latiolais from Hospice of Acadiana for their compassionate care and support. View the obituary and guestbook online at www.mourning.com Martin & Castille-SOUTHSIDE-600 E. Farrel Rd., Lafayette, LA 70508, 337-984-2811

The family of Ronald Gordon Andrus created this Life Tributes page to make it easy to share your memories.

A Celebration of Life service will be held on Saturday, February...

Send flowers to the Andrus family.