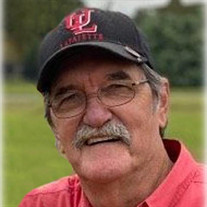 Funeral services will be held on Wednesday, June 16, 2021 at 11:00 AM in La Chapelle de Martin & Castille in Lafayette for Ronnie L. Cooper, age 72, who passed away on Sunday, June 13, 2021 at The Carpenter House of St. Joseph Hospice in Lafayette. The family requests that visitation be observed in Martin & Castille's DOWNTOWN location on Tuesday from 4:00 PM to 8:00 PM and will continue on Wednesday from 8:00 AM until time of services. Interment will be in Lafayette Memorial Park Cemetery. Minister Andrew Fridelle will conduct the funeral services. Survivors include his wife of 50 years, Tessie Labbe Cooper; his daughter, Amy Cooper Spikes and her husband Hershel; his son, Cody Cooper; his grandchildren; Britany Settoon and her husband Derrick, Karlie and Hunter Spikes, and Wyatt, Olive and Benny Cooper; his great grandchildren, Beau and Ellie Settoon; his brothers, Remel Cooper, Jr. and his wife Linda, Kenneth W. Cooper, Sr. and his wife Carol, and Gary Cooper; his sister, Shondra Cooper Watson; and numerous nieces and nephews. He was preceded in death by his parents, Remel Cooper, Sr. and Oneita Jennings Cooper; his brother, Freddie Cooper; his sister, Pamela Cooper Keel; and two infant brothers. Ronnie was a 1967 graduate of Lafayette High School and served his country honorably in the United States Navy. During his lifelong career, he worked in electrical construction as a lineman for Cooper Electric, and went on to Lafayette Consolidated Government until his retirement. He was an avid fisherman, serving as Vice President of ALBC and member of Acadiana Bass Club. Ronnie "Pop" was a hard working man who loved spending time with his family whom he cherished deeply. He enjoyed telling jokes and could make anyone laugh. He was definitely one of a kind and had a personality like no other. Our world will never be the same without him. May he rest in peace. Pallbearers will be Cody Cooper, Hershel Spikes, Derrick Settoon, Kenneth Cooper, Gary Cooper, and David Labbe. Memorial contributions can be made in Mr. Cooper's name to the Wounded Warrior Project, www.woundedwarriorproject.org/donate A heartfelt appreciation is extended by the Cooper family to the nurses, staff and doctors of Our Lady of Lourdes, especially Dr. Elias Moussaly, and The Carpenter House for their kindness and compassion given to Mr. Cooper and his family during their time of need. View the obituary and guestbook online at www.mourning.com Martin & Castille-DOWNTOWN-330 St. Landry St., Lafayette, LA 70506, 337-234-2311

Funeral services will be held on Wednesday, June 16, 2021 at 11:00 AM in La Chapelle de Martin & Castille in Lafayette for Ronnie L. Cooper, age 72, who passed away on Sunday, June 13, 2021 at The Carpenter House of St. Joseph Hospice in Lafayette.... View Obituary & Service Information

The family of Ronnie Lynn Cooper created this Life Tributes page to make it easy to share your memories.

Send flowers to the Cooper family.