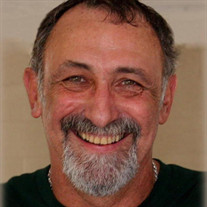 UPDATE: For family and friends unable to attend the Funeral Mass on Saturday, December 5, 2020 at 11:30 AM, we will be livestreaming the service to a Memorial Facebook Group dedicated to Ronnie Olivier. To join the group and attend virtually, please click the link below then click "join group". The video will appear in this group at service time, 11:30 AM. link: www.facebook.com/groups/RonnieOlivier A Catholic Funeral Mass will be held on Saturday, December 5, 2020, at 11:30 AM at Holy Cross Catholic Church in Lafayette, in celebration of the life of Ronnie Olivier, 73, who passed away on Wednesday, December 2, 2020 at Ochsner Lafayette General Medical Center. Military honors will be rendered on Saturday morning at 10:30 AM in Martin & Castille Funeral Home's SOUTHSIDE location. Inurnment will be held on Monday, December 7, 2020 at 10:00 AM in Franklin Cemetery, 1202 Main Street, Franklin, LA, 70538. Reverend Michael Delcambre, Pastor of Sacred Heart of Jesus Catholic Church in Broussard, will conduct the funeral services. Giftbearers will be Cooper Veillon, Yvette Olivier, Brandon Olivier, Henry Olivier, Kaleigh Lilly, Jaxon Lilly, and Dominic Lilly. Ronnie is survived by his wife, May; his children, Monique Olivier Veillon and Jason (Jennifer) Olivier, along with his bonus kids, Kori Lilly (Marcus) and Andy Andersen (Sarah). He had nine grandkids that he loved dearly: Dylan Vaughan (Simone), Hunter Vaughan (Taylor), Cooper Veillon, Yvette, Brandon and Henry Olivier and Kaleigh, Jaxon and Dominic Lilly. He is also survived by his two sisters, Judy (Bill) Hildalgo and Sandra (Wayne) LeBlanc along with numerous nieces and nephews. He was affectionately called the "crazy uncle". He was preceded in death by his first wife, Yvette Boudreaux Olivier; his son, Shane Olivier; and his brother, Don Olivier. Ronnie grew up in New Orleans and remained in that area until his college aged years. He graduated from USL in 1974 and served in the United States Army while stationed in Korea. He was a safety engineer by trade and started Louisiana Safety Consultants in 1996; servicing most of the major sugar mills in Southern Louisiana. Ronnie was also an award-winning photographer. His usual apparel included a camera or two around his neck! His photographs have been published in numerous sugarcane industry journals, as well as, in local regional publications. His book "Louisiana Sugarcane Pictorial: from the Field to the Table" is considered one of the best about the sugar cane world. His greatest joys consisted of taking pictures of all people he met in his daily life, and of course, taking pictures on the field at LSU football games - especially last year with the Championship. He will be deeply missed by his family, friends and business associates. Pallbearers will be Jason Olivier, Wayne LeBlanc, Bill Hidalgo, Dylan Vaughan, Hunter Vaughan, Andy Andersen and Marcus Lilly. Honorary Pallbearers will be Lionel Mire, Michael Mire, Shannon LeBlanc, and Bryan LeBlanc, Sr. The family requests that visitation be observed in Martin & Castille's SOUTHSIDE location on Friday from 1:00 PM to 9:00 PM and on Saturday from 8:00 AM until 10:30 AM. A Rosary will be prayed Friday evening at 7:00 PM in Martin & Castille Funeral Home. In lieu of flowers, memorial contributions can be made in Ronnie Olivier and Shane Olivier's name to St. Jude Children's Research Hospital, 262 Danny Thomas Place, Memphis, TN 38105 or visit stjude.org View the obituary and guestbook online at www.mourning.com Martin & Castille-SOUTHSIDE-600 E. Farrel Rd., Lafayette, LA 70508, 337-984-2811

UPDATE: For family and friends unable to attend the Funeral Mass on Saturday, December 5, 2020 at 11:30 AM, we will be livestreaming the service to a Memorial Facebook Group dedicated to Ronnie Olivier. To join the group and attend virtually,... View Obituary & Service Information

The family of Ronnie Olivier created this Life Tributes page to make it easy to share your memories.

UPDATE: For family and friends unable to attend the Funeral Mass...

Send flowers to the Olivier family.