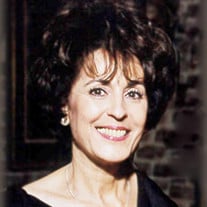 Funeral services will be held on Wednesday, December 9, 2020, at a 10:00 AM Mass of Christian Burial in the Cathedral of St. John the Evangelist Catholic Church in Lafayette, for Mrs. Rosalind Doumit Stockstill, 82, who passed away on her birthday, Sunday, December 6, 2020 at her residence in Lafayette. The family requests that visitation be observed in Martin & Castille's DOWNTOWN location on Tuesday from 5:00 PM until 8:00 PM and resume on Wednesday from 8:00 AM until time of the services. A Rosary will be prayed by Rev. James Brady, Pastor of St. Pius X Catholic Church, Tuesday at 6:30 PM in the funeral home. Entombment will be in Holy Mary, Mother of God Cemetery. Reverend Monsignor Keith J. DeRouen, Pastor of Our Lady Queen of Angels Catholic Church in Opelousas, will serve as Celebrant of the Mass and conduct the funeral services. Lectors will be Sarah Mahtook Toce and Carolyn Mahtook Lasseigne. Giftbearers will be Sophie Anne Stockstill, Isabelle Grace Stockstill, Amy Mayer and Stephanie Mahtook. Jodi Bollich will sing for the Funeral Mass, "Pie Jesu", "Psalm 23", "Peace", "The Lord's Prayer", and "On Eagles' Wings", accompanied on the organ by Tom Niel, trumpet by Will Green and on violin by Lauren Baker. For family members and friends who are unable to attend on Wednesday at 10:00 AM, the service will be live-streamed to a Memorial Facebook Group dedicated to Rosalind D. Stockstill. To join the group, click the link below and then "join group". The video will appear on this group at service time 10:00 AM. You may also share memories, pictures and condolences to the family in this group. Facebook link: www.facebook.com/groups/Rosalinddstockstill/ Survivors include her son, Kevin Stockstill and his wife, Robyn Mayer Stockstill; two grandchildren, Sophia Anne Stockstill and Isabelle Grace Stockstill; and one sister, Joan Doumit. She was preceded in death by her beloved husband, Marshall J. Stockstill; and one brother, Joseph Doumit A native of New Iberia and a resident of Lafayette most of her life, Rosalind was the daughter of the late Emile and Anna Doumit. She received an Associate Degree from USL and was employed as an Administrative Assistant in the Legal and Oil Industry. Rosalind was a full time mother and grandmother. She was gifted with a beautiful voice and had a passion for singing at numerous weddings and funerals. Rosalind was active with USL's Art and Theatre Department participating in various musicals. Pallbearers will be Matthew Toce, Gregory Mahtook, Stephen Mahtook, Henry Mayer, III, Andrew Mahtook, Brandon Stockstill, Brennan Stockstill, Eric Stockstill, Joseph Doumit, Emile Doumit, Robert Mahtook, Jr., Ronnie Mahtook, Gregory Mahtook, Marc Mahtook and Robert Mahtook, III. Memorial contributions can be made in Mrs. Rosalind Doumit Stockstill's name to St. Jude's Children's Research Hospital, www.stjude.org. A heartfelt appreciation is extended by the Stockstill family to Hearts of Hospice, her nurse, Cassie Meynard; and her sitters, Vanessa Landry, Patricia Thomas, Katina Arvie, Pamela Francious, Augustine Lilly and Karen Shockley for the wonderful care given to Rosalind throughout her illness. View the obituary and guestbook online at www.mourning.com Martin & Castille-DOWNTOWN-330 St. Landry St., Lafayette, LA 70506, 337-234-2311

Funeral services will be held on Wednesday, December 9, 2020, at a 10:00 AM Mass of Christian Burial in the Cathedral of St. John the Evangelist Catholic Church in Lafayette, for Mrs. Rosalind Doumit Stockstill, 82, who passed away on her... View Obituary & Service Information

The family of Rosalind Doumit Stockstill created this Life Tributes page to make it easy to share your memories.

Send flowers to the Stockstill family.