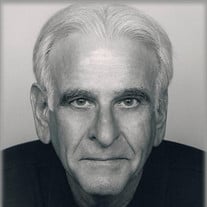 Memorial Services will be held on Thursday, January 6, 2022 at 1:00 PM in Martin & Castille's La Fleur de Lis Chapel in Lafayette, for Russell "Toby" J. Hebert, 84, who passed away at Our Lady of Lourdes Regional Medical Center in Lafayette on Friday, December 31, 2021. The Hebert family requests that visitation be observed in Martin & Castille's SOUTHSIDE location on Thursday from 12 Noon until time of services. Very Rev. William C. Blanda, V.F., Pastor of St. Peter Catholic Church in New Iberia, will conduct the memorial services. Survivors include his beloved wife of 35 years, Joan Hebert; his stepson, Jeff Hastings; his brother, Charles and his niece, Pam. He was preceded in death by his parents, August and Louise Hebert. Toby was born and raised in Gueydan, Louisiana. In 1955, he joined the US Marine Corps and became part of a Tank Battalion serving in both Korea and Okinawa. He would later serve in Washington, DC where he was the aide to a 3 Star General. While in the Marines, Toby was a division boxing champion. Toby received his Bachelor of Criminal Justice from LSU and became a Captain in the Louisiana State Police. He was the first undercover narcotics agent for the state of Louisiana and went on to create the first undercover narcotics team known as the “Original Dirty Dozen”. Toby wrote several articles on the achievements of Louisiana’s enforcement of narcotics laws that were featured in national publications in the early 1970s. After he retired from State Police, Toby went on to become a rancher in Comanche, Texas. After nine years in Texas, he returned to Louisiana and married his wife, Joan. They would eventually buy a ranch in Pagosa Springs, Colorado where Toby ranched once again, and also served as the Undersheriff at the Archuleta County Sheriff Department. After fourteen years in Colorado, Toby returned to Louisiana and joined the New Iberia Sheriff’s Department where he was Chief Deputy and oversaw Internal Affairs. Toby loved Louisiana, Acadiana and his Cajun heritage. Fluent in 4 languages, Toby was able to have a conversation just about anywhere. He loved LSU, speaking French with his buddies, playing Bourré, and he made an amazing Gumbo, too. Toby was a loving husband, friend and stepfather--a True Legend who will be missed. Memorial contributions can be made in Russell J. Hebert's name to either the Louisiana Trooper Foundation (https://louisianatrooperfoundation.org/get-involved/donate/) OR the Tunnel to Towers Foundation (https://t2t.org/donate/) A heartfelt appreciation is extended by the Hebert family to the staff of Our Lady of Lourdes Regional Medical Center. View the obituary and guestbook online at www.mourning.com Martin & Castille SOUTHSIDE, 600 E. Farrel Road, Lafayette, Louisiana, 70508. 337-984-2811

Memorial Services will be held on Thursday, January 6, 2022 at 1:00 PM in Martin & Castille's La Fleur de Lis Chapel in Lafayette, for Russell "Toby" J. Hebert, 84, who passed away at Our Lady of Lourdes Regional Medical Center in Lafayette... View Obituary & Service Information

The family of Russell "Toby" J. Hebert created this Life Tributes page to make it easy to share your memories.