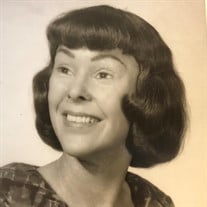 A Mass of Christian Burial will be held on Thursday, December 3, 2020 at 10:00 AM in the Cathedral of St. John the Evangelist in Lafayette for Sally L. Bourgeois, 88, who passed away on Sunday, November 29, 2020 at her residence in Lafayette surrounded by her family. Entombment will be in St. John Cemetery Mausoleum. Reverend Buddy Breaux will conduct the funeral services. Born February 23, 1932, Sally Loretta LaMarque, a native of Slidell, Louisiana, graduated from Slidell High school. She then attended Southeastern Louisiana University in Hammond where she earned a degree in Education. Sally began her career as a librarian and teacher in Lafourche parish where she met the love of her life, Bobby Bourgeois, and the two married on November 21, 1959. Early married life brought them to many new places across south Louisiana, including Venice, Morgan City, Sulphur and Houma. No matter the city, Sally always made it feel like home for her family! In 1975, the family moved to Lafayette where Sally accepted a job as librarian at Cathedral Carmel High School until her retirement in 1981. Her family was her focus, as she often hosted post-game gatherings for family and friends, attended every extracurricular activity for children and grandchildren, or prepared the casual weekday meal for friends and neighbors. Growing up near New Orleans, Sally also had a love for carnival season. She could often be found at the parade route waiving her arms yelling “through me something mister!” As her family grew with some moving out of town, Sally remained in constant communication with them via phone, later mastering the art of text. She never forgot a birthday, anniversary or missed a moment to provide encouragement to her grandchildren just before a big test, game or event. Sally was a devout Catholic and parishioner of Holy Cross Parish, and she instilled the importance of faith and family in her children and grandchildren. Throughout life, she remained a devoted wife, loving mother, grandmother, great-grandmother and friend to many. She will be deeply missed, cherished to memory, and loved for eternity! Survivors include her beloved husband of 61 years, Bobby J. Bourgeois; one daughter, Sally Bourgeois Falivene and her husband, Rob; two sons, Neil Joseph Bourgeois and his wife, Kim, and Marcel LaMarque Bourgeois and his wife, Lauren; eight grandchildren, Jacob Bourgeois, Matthew Bourgeois, Brittany Bourgeois, Adam Falivene, Peter Falivene, Brennan Bourgeois, Elizabeth Bourgeois and John Paul Bourgeois; and one great grandchild, Sawyer Kate Bourgeois. She was preceded in death by her infant son, Blaine J. Bourgeois; her parents, John L. LaMarque and Effie Innerarity LaMarque; her siblings, John C. LaMarque, Gloria Goldman, Richard "Dickie" LaMarque and Ann LaMarque. Pallbearers will be Jacob Bourgeois, Matthew Bourgeois, Adam Falivene, Peter Falivene, Brennan Bourgeois, and John Paul Bourgeois. The family requests that visitation be observed in Martin & Castille's DOWNTOWN location on Wednesday from 4:00 PM to 7:00 PM and on Thursday please join the family at the Cathedral of St. John the Evangelist at 10:00 AM for the Mass. A Rosary will be prayed on Wednesday at 6:30 PM in the funeral home. Memorial contributions can be made in Sally L. Bourgeois' name to St. Jude Children's Research Hospital, www.stjude.org A heartfelt appreciation is extended by the Bourgeois family to the nurses, staff and doctors of Amedysis Hospice, Dr. Stephen Salopek, Dr. John Mickey, Dr. Victoria Panelli and the staff at Cancer Center of Acadiana, and Sally's caregivers for their kindness, compassion and gentle care given to Mrs. Bourgeois during her time of need. View the obituary and guestbook online at www.mourning.com Martin & Castille-DOWNTOWN-330 St. Landry St., Lafayette, LA 70506, 337-234-2311

A Mass of Christian Burial will be held on Thursday, December 3, 2020 at 10:00 AM in the Cathedral of St. John the Evangelist in Lafayette for Sally L. Bourgeois, 88, who passed away on Sunday, November 29, 2020 at her residence in Lafayette... View Obituary & Service Information

The family of Sally L. Bourgeois created this Life Tributes page to make it easy to share your memories.

A Mass of Christian Burial will be held on Thursday, December...