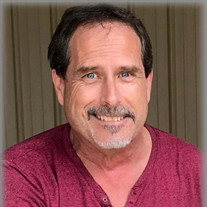 A service celebrating the life of Mr. Scott Jerome Bernard will be held at 12:00 PM on Thursday, August 6, 2020 in La Chapelle de Martin and Castille's DOWNTOWN location. Mr. Scott passed away peacefully on August 3, 2020 at his residence in Lafayette. The family requests that visitation be observed in Martin & Castille's DOWNTOWN location on Thursday, August 6, 2020, from 9:00 AM until time of services at 12:00 PM. Interment will be in St. Paul the Apostle Cemetery in Mansura, La. Reverend Michael Delcambre, Pastor of Sacred Heart Catholic Church of Broussard will conduct the funeral service. Scott was a lifelong resident of Lafayette and was a graduate of the 1985 class of Comeaux High School. He was passionate about cooking and could cook anything with a gravy. He enjoyed music, especially Classic Rock. Some of his pass times were taking his dog Boots for a walk, admiring the nature that God created and spending time with his beloved family. He was known for walking up to any stranger and striking up a conversation as though he had known them for years. Scott was gifted with a servants heart and would never hesitate to help a stranger. He was a devout Catholic and he also enjoyed attending Mother of the Redeemer Monastery in Plaisance to visit the Benedictines Monks with his mother. He will be deeply missed by all who knew him and memories of him will be cherished for a lifetime. Survivors include his daughters, Kayla Dawn Bernard of Broussard and Amy Lynn Bernard of Lafayette; his mother, Sister Patsy Gauthier, S.E.C. of Lafayette; his brother, Craig John Bernard and his wife Amanda of Maurice; his sister, Chantel LeBlanc and her husband, Jesse of Church Point; and his beloved dog Boots. He was preceded in death by his father, Mr. Gaylan Bernard. Pallbearers will be Craig Bernard, Lance Bernard, Blake Bernard, Jesse LeBlanc, Evan LeBlanc and Shannon Franks. Honorary pallbearer will be Shawn Bernard. View the obituary and guestbook online at www.mourning.com Martin & Castille-DOWNTOWN-330 St. Landry St., Lafayette, LA 70506, 337-234-2311

A service celebrating the life of Mr. Scott Jerome Bernard will be held at 12:00 PM on Thursday, August 6, 2020 in La Chapelle de Martin and Castille's DOWNTOWN location. Mr. Scott passed away peacefully on August 3, 2020 at his residence in... View Obituary & Service Information

The family of Scott Bernard created this Life Tributes page to make it easy to share your memories.

A service celebrating the life of Mr. Scott Jerome Bernard will...

Send flowers to the Bernard family.