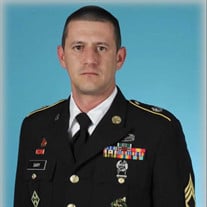 Funeral services will be held on Monday, October 4, 2021, at 1:00 PM in La Chapelle de Martin & Castille for Sergeant First Class Dax Mitchell Gary, 43, who passed away on September 21, 2021, at his residence in Elizabeth, NJ. Interment and full Military Honors will be rendered at Calvary Cemetery. The family requests that visitation be observed in Martin & Castille's DOWNTOWN location on Sunday, October 3, from 3:00 PM to 8:00 PM and will continue on Monday from 9:00 AM until time of services. Pastor Brandon Miller, Lead Pastor of Family Life Church in Lafayette, will conduct the funeral services. Kristy Smith will provide the reading of the obituary and a Eulogy will be provided by Skipper Andaya. Survivors include his son, Myles Gary; his father, Mitchell Gary; his mother, Patty Girouard and her husband, Thomas; his brother, Vince Gary; maternal grandparents, Norman Robin and the former Cecile Johnson; his girlfriend, Erin Henley; and many cousins, relatives and friends. He was preceded in death by his paternal grandmother, Mary Rose Marsiglia; paternal grandfather, Carol Gary; his godmother, Katie Guidry; an uncle, Steven Gary; and a cousin, Marcus Guidry. Dax was a native of Lafayette and currently resided in Elizabeth, NJ where he was honorably serving his country in the United States Army. He was a 1996 graduate of Lafayette High School. Shortly after high school, he began his military career in the with the 5th Battalion, 25th Field Artillery Regiment, Fort Polk U.S. Army. Throughout his 19 years of service to the Army, he received many awards and advancements. Following his return from Iraq, Dax served the military as an U.S. Army Recruiter where he received his most precious career accolades. He took great pride in changing the course of young adult lives by enlisting them into the U.S. Army and giving them a new direction in life. Dax was an artist, a singer, a guitarist, a rocker, a composer, an amazing musician, a true poet….a lover of every music genre. He spoke words of love and encouragement to everyone he knew. He loved spending time with family and friends and always enjoyed life to the fullest. Always putting others before himself and an extremely dedicated soldier, comrade, leader and friend. Dax was very humble and rarely boasted about his awards, plaques, medals or accomplishments. His greatest accomplishment, which he was most proud of, is his son Myles. Dax will be missed by many and loved for eternity. He was truly an amazing and exquisite soul. Pallbearers will be Myles Gary, Vince Gary, Mitchell Gary, Skipper Andaya, Nicholas Guidry and SSG Richard Chambers. Honorary Pallbearer will be Colt Clark. A Rosary will be prayed on Sunday at 6:00 PM in Martin & Castille Funeral Home. View the obituary and guestbook online at www.mourning.com Martin & Castille-DOWNTOWN-330 St. Landry St., Lafayette, LA 70506, 337-234-2311

Funeral services will be held on Monday, October 4, 2021, at 1:00 PM in La Chapelle de Martin & Castille for Sergeant First Class Dax Mitchell Gary, 43, who passed away on September 21, 2021, at his residence in Elizabeth, NJ. Interment and... View Obituary & Service Information

The family of SFC Dax Mitchell Gary created this Life Tributes page to make it easy to share your memories.

Send flowers to the Gary family.