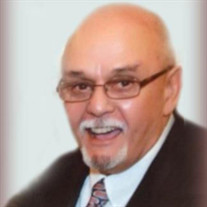 Memorial services will be held on Saturday, October 30, 2021 at Martin and Castille’s La Fleur de Lis Chapel in Lafayette at 1:00 PM for Stephen Edward Champion, 76, who unexpectedly passed away on Wednesday, October 27, 2021 at his residence in Lafayette. The family requests that visitation be observed in Martin & Castille's SOUTHSIDE location on Saturday, October 30, 2021 from 9:30 AM until time of services. A Rosary will be prayed on Saturday at 11:30 AM in Martin & Castille Funeral Home. Inurnment will be in Lafayette Memorial Park Cemetery. Reverend Steven C. LeBlanc, Pastor of St. Basil Catholic Church in Duson, will conduct the funeral services. Survivors include his wife of fifty-four years, Sandra Guidry Champion; his son, Brett Champion and his wife Elizabeth, his daughters, Kimberly Mouton and her husband Alex, and Kerri Breaux and her husband Brad, his brothers, Fred Champion, Jr., and Floyd Champion, his sister, Sonja McCready, his grandchildren , Austin Champion, Emily Champion, Ethan Mouton, Lucas Mouton, Griffin Mouton, Annabeth Mouton, Charles Mouton, Brittan Breaux, Abby Breaux, Addison Breaux and numerous nieces and nephews. He was preceded in death by his parents, Fred Champion, Sr. and Amelia Padilla Champion. Steve was born in Santa Barbara California and moved to Lafayette at the age of 5. He attended Cathedral Carmel and Fatima where he met the love of his life, Sandra. Together they raised three children. Steve worked in the family business, Champion Directional Drilling Services as a Directional Driller and later became President after his father Fred's retirement. He was an avid fisherman and loved being at the family camp in Toledo Bend. He also enjoyed league bowling on Tuesday nights with friends. Most of all, he cherished spending time with his children and ten grandchildren. Honorary Pallbearers will be Austin Champion, Ethan Mouton, Lucas Mouton, Griffin Mouton, Preston Domingue, and Ron Naomi. A heartfelt appreciation is extended by the Champion family to Our Lady of Lourdes JD Moncus Cancer Center, Dr. Elias Moussaly, and Dr. Thomas Callais. View the obituary and guestbook online at www.mourning.com Martin & Castille-SOUTHSIDE-600 E. Farrel Rd., Lafayette, LA 70508, 337-984-2811

Memorial services will be held on Saturday, October 30, 2021 at Martin and Castille&#8217;s La Fleur de Lis Chapel in Lafayette at 1:00 PM for Stephen Edward Champion, 76, who unexpectedly passed away on Wednesday, October 27, 2021 at his residence... View Obituary & Service Information

The family of Stephen Edward Champion created this Life Tributes page to make it easy to share your memories.

Send flowers to the Champion family.