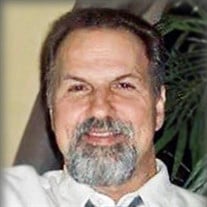 Dr. Stephen E. Hebert passed away peacefully on Friday, November 13, 2020, at the age of 73, following a lengthy battle with Parkinson’s Disease. Stephen was a middle child born on Christmas Eve in the year 1946 to Mr. J. Jerome and Mrs. Olga Hebert in Lafayette, LA. He graduated from Cathedral High School Class of 1964, then attended USL before completing his studies and receiving his Doctorate of Veterinary Medicine at Texas A&M University in College Station, Texas where he became a lifelong AGGIE. "Gig Em!" After college, he returned to Lafayette and opened a small animal veterinary practice. He married Natalie Bienvenu and together they raised six children, Jerome, Zerben, Edward, Charlie, Anthony, and Sarah. He loved the outdoors, hunting, fishing, and being a Scout leader to his boys. In 1989, Stephen left private practice to begin a career with Louisiana Department of Agriculture. As a USDA Veterinarian Medical Officer, Doc enjoyed traveling throughout the state, from the turtle and alligator farms in Pierre Part to the slaughter houses in Carencro at Kirk Martins. He loved his job and meeting people from all over Louisiana. As an avid reader, he loved history, science, and enjoyed any book by his favorite Louisiana Author, James Lee Burke. He was proud of his family, where he was affectionately known as Oliboo. Dr. Hebert shared his love for Cajun music, camping in Butte La Rose, the Atchafalaya Basin swamp, animals and reptiles with both his children and grandchildren. As a friend of Bill he was an imperfect man. A believer in redemption he never met a stranger who he was not able to empathize with. As a sponsor to many in the group, he lent his ear to others who found themselves on their own path to sobriety giving unconditional support and mentorship. He is survived by his wife Hannah Lanclos, his sister Charmaine Juneau (Dan), sister-in-law Brenda Hebert, his first wife and lifelong friend Natalie Bienvenu, sons, Zerben Hebert (Konekeo), Charlie Hebert (Amy), Anthony Hebert (Lexi), daughter Sarah Crawford (Erich), daughter in law Christina Hebert and 15 grandchildren, Sodhi, Zerben , Kalli, Jackson, Spencer, Zoe, Rhett, Rock, Cale, Cait, Gunner, Ava Hebert, and Reagan, Andrew, Carmen Crawford. He is preceded in death by his sons Jerome Hebert and CPO (SEAL)Edward Hebert, his parents J. Jerome and Olga Trahan Hebert, and brother Gabby Hebert. Stephen donated his body to science. There will be a private memorial held at a later date for immediate family and friends. In lieu of flowers, the family requests that donations be made to the Navy SEAL Foundation or Wounded Warriors Project. View the obituary and guestbook online at www.mourning.com Martin & Castille-DOWNTOWN-330 St. Landry St., Lafayette, LA 70506, 337-234-2311

Dr. Stephen E. Hebert passed away peacefully on Friday, November 13, 2020, at the age of 73, following a lengthy battle with Parkinson&#8217;s Disease. Stephen was a middle child born on Christmas Eve in the year 1946 to Mr. J. Jerome and... View Obituary & Service Information

The family of Stephen E. Hebert, D.V.M. created this Life Tributes page to make it easy to share your memories.