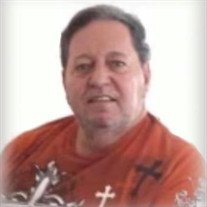 Catholic services will be held on Monday, January 18, 2021, at 11:00 AM in La Chapelle de Martin & Castille in Lafayette, for Steve Karl Daigle, age 67, who passed away on Thursday, January 14, 2021 at his residence in Lafayette, with loved ones by his side. The family requests that visitation be observed in Martin & Castille's DOWNTOWN location on Sunday, January 17 from 11:00 AM to 6:00 PM and on Monday, January 18 from 9:00 AM until time of service. A Rosary will be prayed Sunday afternoon at 4:00 PM in Martin & Castille Funeral Home. Interment will be in St. Bernard Cemetery #2 in Breaux Bridge. Deacon Art Bakeler, with Sts. Peter & Paul Catholic Church in Scott, will conduct the funeral services. For friends and family members unable to attend the service in-person on Monday, the service will be live-streamed to a Memorial Facebook Group dedicated to Steve. To join the group and view the live-stream, please click on the link below and "join group". The video will appear at service time on Monday, 11:00 AM. You may also share pictures, memories and condolences in this group for the family to see. Facebook link: www.facebook.com/groups/SteveKarlDaigle Survivors include his children, Dana Daigle, Shane Daigle and wife, Carolyn, Kevin Daigle and his wife, Tonya, Crystal Daigle Labbe and husband, Bricen, and Dustin Bourque and wife, Amanda; his companion of 11 years, Mary Dowdell Smith; his grandchildren, Brittany Acy (Corby), Michael Kade Woodhouse, Courtney Diate (Travis), Noah Daigle, Jessica Wellette, Jennifer Richardson (Dakota), Nicole Wellette, Kaitlyn Daigle, Aiden Daigle, Emily Daigle, Aubrey Daigle, Maraya Harris, Isaiah Harris, Calvin Harris, Jr., Elijah Labbe, Allie Bourque, Channing Bourque, and Trevor Bourque; his great-grandchildren, Malaya Ellison, Wyatt Ellison, Kensley Ellison, Hadley Diate, Isabella Johnson, Olivia Richardson, and Samuel Richardson; his siblings, Debbie Broussard (Lenwood), Kirk Daigle, Melanie Daigle, and Marty Daigle (Paula); and many nieces, nephews, and godchildren. He was preceded in death by his wife, Penny Bourque Daigle; his parents, James Warren Daigle and Mary "Blondie" Plaisance Daigle; his grandson, Christopher Michael Daigle. Steve Karl Daigle was born in Lafayette, Louisiana in May of 1953. Steve was a truck driver in the oil & gas industry and was a jack of all trades. He worked for Albertson's as produce manager before becoming disabled. Steve was a good husband, father, grandfather, great-grandfather and companion. He had a great sense of humor and could make anyone laugh. He was an avid Saints fan and enjoyed watching the games with his family. Steve was very social and could hold a conversation with anyone. He never met a stranger. Steve was kind, genuine and a great role model for his family. He will be dearly missed. Pallbearers will be Shane Daigle, Kevin Daigle, Dustin Bourque, Kirk Daigle, Marty Daigle, Shandy Broussard, Isaiah Harris, and Aiden Daigle. Honorary Pallbearers will be Bricen Labbe and Lenwood Broussard. A heartfelt appreciation is extended by the Daigle family to the doctors and staff of NSI Hospice, especially Sharon and Wendy, for their compassion and care during Steve's time of need. View the obituary and guestbook online at www.mourning.com Martin & Castille-DOWNTOWN-330 St. Landry St., Lafayette, LA 70506, 337-234-2311

Catholic services will be held on Monday, January 18, 2021, at 11:00 AM in La Chapelle de Martin & Castille in Lafayette, for Steve Karl Daigle, age 67, who passed away on Thursday, January 14, 2021 at his residence in Lafayette, with loved... View Obituary & Service Information

The family of Steve Karl Daigle created this Life Tributes page to make it easy to share your memories.

Send flowers to the Daigle family.