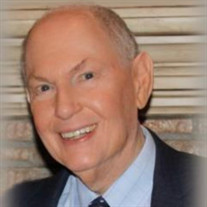 Funeral services will be held on Sunday, January 23, 2022 in La Chapelle de Martin & Castille at 2:00 P.M. in Lafayette for Steven J. Dupuis, Sr., 73, who passed away at his residence in Lafayette on Thursday, January 20, 2022. Interment will be in Greenlawn Memorial Gardens. Reverend Monsignor J. Douglas Courville, JCL, Pastor of St. Stephen Catholic Church in Berwick, will conduct the funeral services. Lectors will be his sister-in-law, Tammy Theriot and daughter-in-law, Mara Malherbe. Steve was a faith-filled Catholic who loved to be surrounded by family and friends. He wholeheartedly believed in God and attended mass daily. He also believed in the power of prayer and healing. He was born June 3, 1948 in Lafayette to the late Genevieve Houssiere Dupuis and Dr. John Willis Dupuis, Jr. He practiced law in Lafayette, Louisiana for 46 years, all of his professional career. When he wasn’t in the office he could be found at his children and grandchildren’s sporting events or dining at the finest restaurants in town. Steve was especially fond of Keller’s Bakery and was known as “Uncle Cookie” to many. He had a great sense of humor and was a terrific storyteller as well. He was always a gentleman and greeted everyone kindly, both friends and strangers. Survivors include his loving wife, Melissa (Missy) Leger. He was the proud father of eight children; Steven J. (Joey) Dupuis, Jr., Jeffrey P. Dupuis, Dr. Gregory M. Dupuis, Katherine E. (Katie) Dupuis Martin, Paul L. (Lee) Dupuis and wife, Mara Malherbe, Grant J. Dupuis, Amélie H. Dupuis, and Angelle G. Dupuis; six grandchildren, Steven J. (Joe) Dupuis, III, Lily K. Dupuis, Evans B. Dupuis, Alexander S. (Alex) Dupuis, Charlotte R. (Charley) Martin, and Lincoln J. Martin; his brother, James H. (Jimmy) Dupuis and his wife, Debbie; his father and mother-in-law, Merlin and Joanne Leger, and numerous nieces and nephews. Pallbearers will be Steven J. (Joey) Dupuis, Jr., Jeffrey P. Dupuis, Dr. Gregory M. Dupuis, Paul L. (Lee) Dupuis, Grant J. Dupuis, and Jimmy Dupuis. Honorary Pallbearers will be his grandchildren, Merlin Leger, Jonathan Cernek, Lovelin Poncho, Dr. Federico Del Toro, Mike Harson, Steve Theriot, Keith Leger, and his Cathedral High School Class of 1966. He was preceded in death by his parents and one brother, John Willis Dupuis III. The family would like to acknowledge and thank his caregivers including Lori Chain and Hospice of Acadiana for the love and support they provided in his time of need. The family would also like to thank Father Manny Fernandez for his guidance, friendship, love, and care over the years. The family requests that visitation be observed in Martin & Castille's DOWNTOWN location on Saturday from 5:00 P.M. to 8:00 P.M. and will continue on Sunday from 12 Noon until time of services. A Rosary will be prayed on Saturday at 6:00 P.M. in Martin & Castille Funeral Home. View the obituary and guestbook online at www.mourning.com Martin & Castille-DOWNTOWN-330 St. Landry St., Lafayette, LA 70506, 337-234-2311

Funeral services will be held on Sunday, January 23, 2022 in La Chapelle de Martin & Castille at 2:00 P.M. in Lafayette for Steven J. Dupuis, Sr., 73, who passed away at his residence in Lafayette on Thursday, January 20, 2022. Interment will... View Obituary & Service Information

The family of Steven Joseph Dupuis, Sr. created this Life Tributes page to make it easy to share your memories.