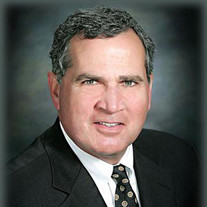 Kirby Arceneaux, 63, passed away on Friday, January 8, 2021 surrounded by his loved ones after a lengthy illness. Kirby was born in Morgan City, LA and was a resident of Lafayette since 1997. A family visitation was held at Martin and Castille on January 12, from 12:00 PM to 1:30 PM followed by a private Mass of Christian Burial at Our Lady of Wisdom Catholic Church at 2:00 PM. A Rosary was led by Ali Claudet at 12:45 PM in Martin & Castille Funeral Home. Burial followed at Lafayette Memorial Park Cemetery. Reverend Cedric Sonnier and Reverend Bryce Sibley conducted the funeral services. Ryan Claudet, Vocalist; Joni Hamilton, Organist; Lisa Sheppert, Flautist; and Bill Sheppert, Trumpeter performed, "Come to the Water", "Whatsoever You Do", "On Eagles' Wings" and "I Know that My Redeemer Lives". Kirby grew up in Morgan City with 8 siblings. He graduated from Morgan City High School before attending and graduating from Northeast Louisiana University (now ULM). He attended NLU on a football scholarship, eventually becoming the team captain and quarterback. After graduating from NLU, Kirby began his career in oilfield services and served in various sales and management capacities with Oil & Gas Rental Services from 1990 to 1997. From there, he became Executive Vice President of Offshore Energy Services. Kirby always knew he wanted to start his own business and he and his partners founded Wellbore Energy Solutions in 2006. After selling Wellbore Energy Solutions to a major service company, he went on to start Wellsite Fishing and Rental Services in 2013 and retired in 2020. He developed many close and lasting friendships with customers, suppliers, and co-workers. Kirby served on the board of Spindletop Charities, LAGCOE, American Petroleum Institute, and Big Brothers Big Sisters of Acadiana. He was honored to be chairman of LAGCOE in 2013 and was the 2014 Honoree for the American Cancer Society, South region. Cherishing the memory of Kirby Arceneaux include his beloved wife, Susan Sheppert Arceneaux; daughter, Ali Claudet (Ryan); two sons, Blake Arceneaux (Aimee), and Matthew Arceneaux (Catherine); two step-sons, Ben Duplechin and Kevin Duplechin; sister, Suzie Roussel (Steve); six brothers, Chris Arceneaux (Leslie), Frank Arceneaux (Sarah), Paul Arceneaux (Michelle), Bob Arceneaux (Lisa), Al Arceneaux, and Michael Arceneaux, one sister-in-law, Rose Arceneaux; and grandchildren, Cye, Wellman, Thomas, Kate, Claire, Kaleb, Katelyn, Jacob, Graham, and Nathan. He was preceded in death by his parents, Ralph and Maria Russo Arceneaux, and one brother, Stephen Arceneaux. Kirby will be remembered for his humility, integrity, charity and kindness. The family is grateful for all of the stories people have shared about Kirby touching their lives in so many ways. He had a strong desire to help others through mentoring. But his love for his wife, children, grandchildren, and stepchildren was always his greatest joy. He was happiest when surrounded by his family and friends at his property in the country, Big Cane Farms, and entertaining at home while cooking pizza in their wood fired oven. Whether fly fishing, golfing or hiking, memories were made traveling with Susan and close friends. His Catholic faith was an integral part of Kirby's life. He was a parishioner of St. Mary Catholic Church. He looked forward to his Bible study group and his annual Manresa retreat. Pallbearers will be Blake Arceneaux, Matthew Arceneaux, Ben Duplechin, Kevin Duplechin, and Ryan Claudet. Special thanks are extended to those who helped Kirby along this journey, especially Latencia, Justine and Katina who took great care of him during his final months. In lieu of flowers, Kirby requested donations in his memory be directed to Big Brothers Big Sisters of Acadiana, an organization that creates and supports one-to-one mentoring relationships for youth in Acadiana. Donations can be made at www.acadianabigs.com or mailed to 123 E. Main St. Lafayette LA 70501, or a contribution can be made to the Kirby and Susan Arceneaux Giving Fund at Community Foundation of Acadiana at 1035 Camellia Blvd., Suite 100, Lafayette LA 70508, which will be distributed by his family to a local charity. The family encourages any memories of Kirby be shared online at www.mourning.com Martin & Castille-SOUTHSIDE-600 E. Farrel Rd., Lafayette, LA 70508, 337-984-2811

Kirby Arceneaux, 63, passed away on Friday, January 8, 2021 surrounded by his loved ones after a lengthy illness. Kirby was born in Morgan City, LA and was a resident of Lafayette since 1997. A family visitation was held at Martin and Castille... View Obituary & Service Information

The family of Thomas Kirby Arceneaux created this Life Tributes page to make it easy to share your memories.