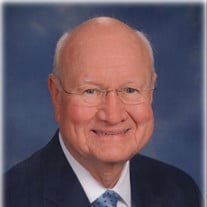 Thomas H. Foard, 88, died peacefully on August 30, 2020 at his residence in Lafayette, surrounded by his family. Funeral services will be held on Friday, September 4, 2020, at 10:00 AM in La Chapelle de Martin & Castille. Entombment will be held at Fountain Memorial Gardens Cemetery in Lafayette. The Reverend Zach Sasser, Pastor of First Presbyterian Church, will officiate. Present for the services will be, Reverend F. Hampton Davis III, Reverend Howard Blessing, and Reverend William Massie. Jodi Bollich, organist and soloist, accompanied by Wil Green, trumpeter and Lauren Baker, violinist, will sing for the services, "Amazing Grace", "How Great Thou Art" and "Battle Hymn of the Republic". Tom was born in Yazoo City, Mississippi on February 13, 1932. He was the son of Robert A. Foard and Helen Blount Foard. He graduated from Yazoo City High School in 1950 and while in high school was a member of the National Honor Society, National Athlete Scholastic Society and lettered in track and football. He went on to attend the University of Mississippi (Ole Miss), was a member of the Sigma Alpha Epsilon Fraternity, the Arnold Air Society and was a recipient of the Wall Street Journal Achievement Award. He earned his Bachelor of Business Administration Degree with a major in Banking and Finance from Ole Miss in 1954. Following his graduation, Tom served 2 years as a Lieutenant in the United States Air Force, stationed at Keesler AFB in Biloxi, Mississippi. Tom completed his military service and began his employment in the investment industry with Kohlmeyer & Company in New Orleans, LA., as a registered Representative of the New York Stock Exchange. On March 4, 1957, Kohlmeyer & Co. opened the first branch of a NYSE Member firm in Lafayette, LA. Tom was there on opening day and began his long career as a financial advisor in Lafayette. On April 15, 1965, the entire Lafayette office joined Shearson, Hammill & Co., a member firm of the NYSE, and after many name changes over the years, becoming the local office branch of Morgan Stanley. Tom remained an investment advisor for 63 years. Tom was chosen as a member of the President’s Council and Chairman Council for many years and earned trips to many wonderful vacation spots such as Hawaii, Lake Louise in Canada, The Greenbriar in West Virginia, Palm Beach, Florida, San Francisco and San Diego, California, Tucson and Scottsdale, Arizona, Bermuda, Acapulco, Mexico, the Florida Keys and many others. He loved his work and his clients and hope that they continue to remain financially secure. Much appreciation is given to his associates, Gladys Perry and Betty Dore', for their loyalty through all the years. Tom was extremely devoted to First Presbyterian Church of Lafayette serving in many capacities for over 63 years including Stewardship and Finance, being an Elder, Deacon and Usher. Tom was a longtime member of the Krewe of Gabriel, serving as Commodore from 1972-1973 and continued his active service as a Past Commodore on the Board of Directors for many years. He was honored to have his daughter, Mary O'Neil, reign as Queen Evangeline XLVI. He was also a member of The Musket Club. He was a Charter Member of the Pinhook Rotary Club and member and Past President of the United Way of Acadiana. Tom was a proud supporter of the Acadiana Symphony and Chorale Acadienne. In his rare spare time, Tom loved his Red's membership, staying actively running at the age of 88. He loved his family and enjoyed spending time with them on family vacations and weekly "hamburger Saturday". Tom was an avid Ole Miss and Saints fan. Tom married the love of his life, Celia Chachere and they recently celebrated their 57th wedding anniversary. Together they had five children, Tommy Foard II (Janet), Mary O’Neil Fudge (Gary), Robert C. Foard (Carrie), Richard B. Foard and Helen Elizabeth “Betsy” Deshotels (John); six grandchildren, Megan Fudge, Hayden Fudge, John Thomas Foard, Everett Foard, Emily Deshotels and Ashley Deshotels. He was preceded in death by an infant son, Christopher Andrew Foard; his parents, Robert A. Foard and Helen Blount Foard of Yazoo City, Mississippi; and one brother Robert B. Foard. Pallbearers will be Tommy Foard, Robert Foard, Richard Foard, Hayden Fudge, John Thomas Foard and Everett Foard. Honorary Pallbearers will be Gary Fudge, John Deshotels, Andy Black, Howard Franques and the Honorable Don Aaron. The family requests that visitation be observed in Martin & Castille's DOWNTOWN location on Thursday from 4:00 PM until 8:00 PM and on Friday from 8:00 AM until time of service. A Rosary will be prayed on Thursday at 6:30 PM in Martin & Castille Funeral Home. For family members and friends who are unable to attend Friday, September 4, 2020, the service will be live-streamed to a Memorial Facebook Group dedicated to Thomas H. Foard. To join the group, click the link below and then "join group". The video will appear on this group at service time, 10:00 AM. You may also share memories, pictures and condolences to the family in this group. Facebook link: www.facebook.com/groups/Thomashfoard Memorial contributions can be made in Mr. Foard's name to the Schools of the Sacred Heart. A heartfelt appreciation is extended by the Foard Family to Stacey Frederick, Leslie Carrere and Tina Sinegal of Nursing Specialties, Inc. given to Tom during his brief illness. The Foard family would also like to give thanks to our very loyal Housekeeper, Patsy Felix Faulk of 44 years who gave her all to see Tom's shirts were freshly ironed and more! View the obituary and guestbook online at www.mourning.com Martin & Castille-DOWNTOWN-330 St. Landry St., Lafayette, LA 70506, 337-234-2311

Thomas H. Foard, 88, died peacefully on August 30, 2020 at his residence in Lafayette, surrounded by his family. Funeral services will be held on Friday, September 4, 2020, at 10:00 AM in La Chapelle de Martin & Castille. Entombment will be... View Obituary & Service Information

The family of Thomas H. Foard created this Life Tributes page to make it easy to share your memories.

Send flowers to the Foard family.