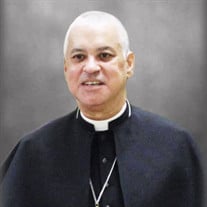 A Mass of Christian Burial will be held on Friday, May 28, 2021 at 12 Noon in the Cathedral of St. John the Evangelist in Lafayette for Father Thomas Jacenh Mouton, 56, who died on Monday, May 24, 2021 at The Carpenter House of St. Joseph Hospice in Lafayette, surrounded by his family and clergy. Interment will be in St. Anne Cemetery in Youngsville, Louisiana. Most Reverend J. Douglas Deshotel, D.D. will be the Celebrant of the Mass along with concelebrants. The Deacon of the Word and homilist will be Deacon Wynard Boutte and Deacon of the Altar will be Deacon Sammy Russo, Jr. Reverend Thomas Jacenh Mouton was born on December 17, 1964 in Youngsville, Louisiana. He attended the University of Southwestern Louisiana from 1982-85 majoring in Chemistry and went on to graduate from St. Joseph Seminary College in 1987 with a B.A. in Philosophy. Father Mouton spent a year at Sacred Heart in Ville Platte (1987-1988) with Father’s Michael Jarrell, Gil Dutel and Jay Voorhies. He attended Mt. St. Mary’s University in Emmitsburg, Maryland and received a Master of Divinity Degree in 1991. In 1992 He received his Master of Arts Degree graduating Summa Cum Laude in Systematic/Dogmatic Theology. During his time at Mt. St. Mary’s, he was awarded the Hamilton-Mitchell full academic scholarship for three consecutive years. Father Mouton was ordained June 13, 1992 by Bishop Harry Flynn and his first pastoral assignment was as parochial vicar of Holy Rosary-Cabrini church in Kaplan. In 1993 Bishop Flynn appointed him to serve on the priest council for a three-year term and in 1994, now Archbishop Harry Flynn, appointed him as pastor of Our Lady, Queen of Peace where he served for thirteen years. In 1995 Bishop O’Donnell appointed him Diocesan Master of Ceremonies and Director of the Office of Worship, a position he held for ten (10) years. He was a regular presenter on the Diocesan program "Tell the People" for a number of years. He held the position of Chancellor of Holy Family Catholic School in Lafayette for seven (7) years. In 2004, Cardinal William Keeler of Baltimore requested that he be released from the diocese to serve on the faculty of Mt. St. Mary’s University, but the bishop declined the invitation. In 2005 the Rector of the Pontifical College Josephinum in Columbus, Ohio requested that Fr. Mouton be released to serve on that faculty, but the bishop again declined the invitation. In 2006 Queen of Peace parish awarded him the Martin Luther King, Jr. award for outstanding service to the church parish and greater community. His home parish is St. Anne’s, Youngsville where he served as Pastor for twelve years from 2007- 2019. Father Mouton currently served as Pastor of St. Martin de Tours Catholic Church in St. Martinville. Father Mouton enjoyed reading and traveling and has preached missions throughout the country. His mentors are Fr. Joseph Alexander and the late Bishop Leonard Olivier (former Auxiliary Bishop of Washington, D.C.). Survivors include three brothers, Joseph Wilton Mouton and his wife, Earline of Lafayette, LA, Bryne Al Mouton also of Lafayette, LA and Gary Mouton and his wife Cathy of Lafayette, LA; one sister, Dr. Anchell M. Chevalier and her husband, Kevin of Youngsville, LA; nine nieces and nephews, Lance Joseph Mouton and his wife Taylor, Gary John Mouton, Jr., Aaron Matthew Mouton, Christopher Michael Mouton, David Paul Mouton, Tristin Isaiah Chevalier, Noah Vaughn Chevalier, Bryanna Ledet and Tyson Mouton; and three great nieces and nephews, Chandler Mouton, Myles Mouton, Blaire Mouton and Brynlee and Harper Ledet and a host of other relatives and friends. He was preceded in death by his parents, Eldridge Joseph Mouton, Sr. and Dolores Chaisson Mouton; one brother, Eldridge Joseph Mouton, Jr. Pallbearers will be his nephews, Lance Joseph Mouton, Gary John Mouton, Jr., Aaron Matthew Mouton, Christopher Michael Mouton, David Paul Mouton, Tristin Isaiah Chevalier and Noah Vaughn Chevalier. The family requests that visitation be observed in Cathedral of St. John the Evangelist from 9:00 A.M. until time of services. A Rosary will be prayed by Sister Uyen Vu and Father Aaron Melancon on Friday at 10:00 A.M. in the Cathedral of St. John the Evangelist. Memorial contributions can be made in Father Jacenh Mouton's name to Office of Black Catholic Ministries (African American Catholic Youth Congress), 1408 Carmel Drive, Lafayette, La 70501. View the obituary and guestbook online at www.mourning.com Martin & Castille-DOWNTOWN-330 St. Landry St., Lafayette, LA 70506, 337-234-2311

A Mass of Christian Burial will be held on Friday, May 28, 2021 at 12 Noon in the Cathedral of St. John the Evangelist in Lafayette for Father Thomas Jacenh Mouton, 56, who died on Monday, May 24, 2021 at The Carpenter House of St. Joseph Hospice... View Obituary & Service Information

The family of Father Thomas Jacenh Mouton created this Life Tributes page to make it easy to share your memories.

Send flowers to the Mouton family.