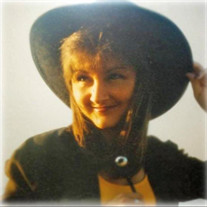 A Celebration of Life service will be held for Mrs. Vicki Huval, on Saturday, September 19, 2020 at 1:00 PM at Martin and Castille Funeral Home's DOWNTOWN location. Mrs. Vicki passed away peacefully on Thursday, September 17, 2020 at the Carpenter House of St. Joseph Hospice in Lafayette. The family requests that visitation be observed in Martin & Castille's DOWNTOWN location on Saturday, September 19, 2020 from 11:00 AM until time of services at 1:00 PM. Interment will be in Lafayette Memorial Park immediately following the service. Deacon Cody Miller will conduct the funeral services. Vicki was born in Houma, La. on September 22, 1961. As a child of the sixties and seventies, Vicki loved rock and roll, was an avid drummer, and was raised shooting pool. She met her first husband Gary Galvez, and together had their first child, Christopher Galvez in 1979. She worked for Al George Incorporated for many years which is where she fell in love with her second husband, Mike Huval. Vicki married Mike in 1995 and together in 2000, they had a son, Jesse Huval. Jesse and Christopher shared the same birthday, 21 years apart. One of the highlights of her life was when Jesse and Christopher celebrated their birthdays together. Not long after Jesse was born, her grandson, Christian Galvez was born and early on, she spent many days and nights cherishing time with them both. Vicki’s heart was full of love. She always gave, putting herself second to everyone important to her. She fiercely loved her family and was always the biggest supporter and strongest fighter for them. She loved her pets and she enjoyed traveling the world. She also adored her daughter-in-law, Chamaine Galvez. She was a loving wife, mother, grandmother, sister, daughter and friend who will be dearly missed by everyone she touched. Her footprint on this world will be forever ingrained in those who had the pleasure of knowing her. Survivors include her husband, Mike Huval; two sons, Christopher Galvez and his wife, Chamaine and Jesse Huval; her grandson, Christian Galvez; two brothers James "Jimbo" Huval and Kelly Joe Huval who was also her godchild; one sister, Dixie Huval Mulhearn; and numerous nieces, nephews including her godchildren, Derek Rabalais and Gunnar Caswell. She was preceded in death by her parents, Mr. James Murland Huval Sr. and Mrs. Betty Bearbe Huval; one sister, Roxanne Huval Rabalais-Bihm; and one nephew, Dylan Michael Bihm. Pallbearers will be Chris Galvez, Christian Galvez, Jesse Huval, Kelly Joe Huval, DJ Rabalais and Gunnar Caswell. Honorary Pallbearers will be Jimbo Huval and Ronnie Huval. Memorial contributions can be made in Mrs. Huval's name to the Paralyzed Veterans of America at https://pva.org/# A heartfelt appreciation is extended by the Huval family to the nurses, staff and doctors of The Carpenter House of St. Joseph Hospice for their kindness, compassion and loving care given to Vicki and her family during their time of need.. View the obituary and guestbook online at www.mourning.com Martin & Castille-DOWNTOWN-330 St. Landry St., Lafayette, LA 70506, 337-234-2311

A Celebration of Life service will be held for Mrs. Vicki Huval, on Saturday, September 19, 2020 at 1:00 PM at Martin and Castille Funeral Home's DOWNTOWN location. Mrs. Vicki passed away peacefully on Thursday, September 17, 2020 at the Carpenter... View Obituary & Service Information

The family of Vicki Huval created this Life Tributes page to make it easy to share your memories.

A Celebration of Life service will be held for Mrs. Vicki Huval,...

Send flowers to the Huval family.