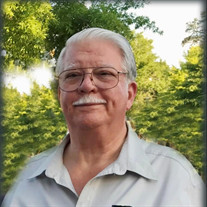 Funeral services will be held on Monday, January 24, 2022 at 12 Noon in La Chapelle de Martin & Castille for W. Scott Lauck, 78, who died on Saturday, January 22, 2022. Deacon Cody Miller will conduct the funeral services. Survivors include his loving wife of 48 years, Gay Cloninger Lauck of Lafayette; one daughter, Rebecca Lauck Cleary and her husband Peter of Oxford, MS; a sister-in-law, Martha L. Cross and her husband James of Lafayette; and two brothers-in-law, Chook Cloninger and his wife Lydia of Lafayette, and Tommy Cloninger and his wife Colleen of New Orleans. He was an amazing uncle to six nieces and two nephews. He was preceded in death by his parents, Shirley Drury Lauck and Benjamin W. Lauck, and one brother, Arthur D. Lauck, Sr. Scott was born and raised in New Orleans, Louisiana. He graduated from Fortier High School in New Orleans in 1960. He then moved to Lafayette, Louisiana in 1967 to open The Raven, which then became the Lock and Key Restaurant. After that, Scott began a career with Lauck Technical Services specializing in the design and installation of sound systems in restaurants and commercial buildings, many of which are still in use today. In his later years, he returned to his roots in the food and beverage industry. Scott had a lifelong fascination with trains and was a member of the National Model Railroad Association, the Southern Pacific Historical Association, and the Illinois Central Historical Society. The family requests that visitation be observed in Martin & Castille's DOWNTOWN location on Monday from 10:00 A.M. until time of services. Honorary pallbearers include Peter J. Cleary, Arthur D. Lauck, Jr., Chook Cloninger, Tommy Cloninger, and James Cross. Memorial contributions can be made in W. Scott Lauck's name to Hospice of Acadiana, 2600 Johnston St Suite 200, Lafayette, LA 70503 www.hospiceacadiana.com A heartfelt appreciation is extended by the Lauck family to Dr. Bader Kfoury and Dr. Thad A. Bourque. View the obituary and guestbook online at www.mourning.com Martin & Castille-DOWNTOWN-330 St. Landry St., Lafayette, LA 70506, 337-234-2311

The family of W. Scott Lauck created this Life Tributes page to make it easy to share your memories.

Send flowers to the Lauck family.