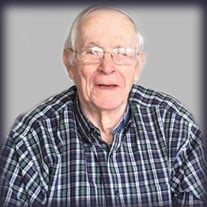 A Memorial Mass will be held on Monday, November 16, 2020 at 2:00 PM in St. Martin de Tours Catholic Church in St. Martinville for Walter James Burke II, 89, who passed away on Thursday, October 22, 2020 at Courtyard Manor in Lafayette. The family requests that visitation be observed in Martin & Castille's SOUTHSIDE location on Monday from 8:30 AM until 11:30 AM with a Rosary recited at 10:00 AM in the funeral home. Following the visitation, the family will meet guests attending the Mass at the Church at 2:00 PM Monday. Inurnment will be in St. Michael Mausoleum in St. Martinville. The family requests that in respect for others that may be dealing with compromised health issues or illness, that current practices of social distancing and the wearing of masks be observed during these events. Reverend Monsignor Harry Greig will officiate the memorial Mass. Survivors include his children, Jon "Gunny" Burke and fiancée, Felicia Duhon, Lafayette, LA, Neal J. Burke and his wife, Donna, Youngsville, LA, Anna Claire Burke Robinson and husband, Richard, Gainesville, FL, Kady Burke Pitre and her husband, Joe of French Settlement, LA, Walter James “Jim” Burke III and his wife, Donna Pat of Austin, TX, and Barbara Burke Scott and her husband, Jeff, Vancouver, WA; Paul Maraist, brother in law, St. Martinville, LA; twenty grandchildren, and twenty-nine great grandchildren. He was preceded in death by his beloved wife of 63 years, Marie Amelie Burke; parents, Oliver H. Burke and Jean "Jack" E. Webster Burke; father-in-law and mother-in-law, L. John Maraist and the former Anna Melancon; his sister, Barbara Ann Burke; and his daughter in law, Annette Fontenot Burke. Walter grew up in St. Martinville, Louisiana and attended St. Martin High, graduating in 1949. He was known as an all around athlete, participating in football, basketball and tennis. He was a member of the 1949 LA state football championship team. He then attended Southwestern Louisiana Institute (now ULL) majoring in Physical Education before joining the United States Marine Corp. He was stationed at Fort Pendleton in San Diego, California. He was awarded the Rifle Sharpshooter Badge and served as a Drill Instructor. In May of 1950, he married his high school sweetheart, Amelie Maraist. Walter served Active Duty until June 1952 with the final rank of Sergeant. He continued to serve in the USMC Reserves until he was honorably discharged on June 29,1955. Walter’s experience as a Drill Instructor came in handy as he and Amelie raised 6 energetic children. While residing in St. Martinville, he was involved in various civic organizations. Walter is known for being one of the organizers of the midget football league and was awarded Man of the Year for St. Martinville in 1967. The family then moved to Lake Charles, LA for Walter to continue his career with GMAC. Walter’s continued interest in military life led him to research and compile notebooks documenting the stories of honored Medal of Honor recipients. In 2001, with all of the children independent and living throughout the country, he and Amelie retired to Youngsville, LA to be closer to their extended family. Walter counted his major success in life to be his 6 children and his service in the Marine Corp. Honorary Pallbearers will be all of his grandchildren along with the following friends and extended family: PR Burke, Dracos Burke, Marcel Maraist, Ed Landry, Dr. Jay Halphren, Jared Fournet, Harry DeValcourt (deceased), Perry Burke (deceased), Dr. Mike Halphren (deceased), Charlie Pucheu (deceased), John Broussard (deceased), and Shane Broussard (deceased). In lieu of customary remembrances, memorial contributions can be made in Mr. Walter Burke's name to Hospice of Acadiana. A heartfelt appreciation is extended by the Burke family to Hospice of Acadiana, Grace Health, [email protected], Garden View Assisted Living and Courtyard Manor in supporting the health and well-being of Walter in his final years. View the obituary and guestbook online at www.mourning.com Martin & Castille - SOUTHSIDE, 600 E. Farrel Road, Lafayette, Louisiana, 70508. 337-984-2811

A Memorial Mass will be held on Monday, November 16, 2020 at 2:00 PM in St. Martin de Tours Catholic Church in St. Martinville for Walter James Burke II, 89, who passed away on Thursday, October 22, 2020 at Courtyard Manor in Lafayette. The... View Obituary & Service Information

The family of Walter James Burke II created this Life Tributes page to make it easy to share your memories.