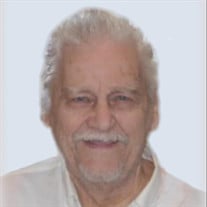 Funeral services will be held on Friday, November 20, 2020 at 2:00 PM in Martin & Castille's La Chapelle for Walter Hebert, Jr., 75, who passed away suddenly on Sunday, November 15, 2020 at his residence in Lafayette. Deacon Cody Miller will conduct the services. Interment will be in Greenlawn Memorial Gardens. The family requests that visitation be observed in Martin & Castille's DOWNTOWN location on Thursday from 10:00 AM until 9:00 PM and on Friday from 8:30 AM until time of services. A Rosary will be prayed on Thursday at 6:00 PM in Martin & Castille Funeral Home. Survivors include his beloved wife of 56 years, Charlotte Gary Hebert; his seven daughters, Jacquelyn Menard and husband, Daniel, Sherri Folse and husband, Gregory, Belinda Hayes and husband, Lonnie, Sydni Turner and husband, John, Tina Hebert and Josh, Heidi Blanchard and husband, Brian, and Sarah Savoy and husband, Jamie; and his 20 grandchildren and 27 great-grandchildren. He was preceded in death by his parents, Walter Hebert, Sr. and Lily Gary Hebert; his step-sisters, Jannett and Maryanne. Walter Hebert, Jr. was a native of New Iberia, Louisiana and a long-time resident of Lafayette, Louisiana. Walter, also known as "Paw" and "Country", was a beloved husband, father of 7 girls, grandfather and great-grandfather. He attended Northside High School and worked for the Lafayette Parish Sheriff Department, where he earned his nickname "Country". He loved his boots and even wore them with his police uniform. Later he worked for Frank's Casing Crew. He sacrificed a lot, sometimes he had to miss Christmas or Thanksgiving but he was proud to support his family. Walter met the love of his life, Charlotte Gary in the summer of 1963. After only a year of dating, they married in May of 1964. Together they raised seven beautiful daughters. Paw made sure to teach his daughters how to change a tire and take care of themselves. He raised his daughters to be strong and to have a sense of humor. His love for Charlotte and his daughters never wavered. When his grandchildren were born, he spoiled them rotten and wouldn't allow them to be fussed in front of him. He loved all of his grandchildren and great-grandchildren deeply. Paw was a funny man and was the glue of the family. He made sure to make every family vacation one to remember. He was a character and was always up to something. He didn't talk much, but when he did, it was either hilarious or profound. On a Friday night, he loved to sit outside, a Miller Lite or some Crown in his hand, having a good time with his children and his wife at his side. When we meet him again in Heaven, we know he'll be waiting for us with a hug and a kiss. The impressions he made on his family will never be forgotten. His legacy will be passed on to all of his grandkids and great-grandkids. Pallbearers will be his sons-in-law, Daniel Menard, Gregory Folse, Lonnie Hayes, John Turner, Josh Thibeaux, Brian Blanchard, and Jamie Savoy. Honorary Pallbearers will be his grandsons. Memorial contributions can be made in Mr. Hebert's name to his beloved wife, Charlotte Gary Hebert. A heartfelt appreciation is extended by the Hebert, Jr. family to Acadiana Ambulance, Lafayette Police and Fire Department, and especially to his grandson, Garrett Folse who immediately began administering CPR and stayed by his side until help could arrive. View the obituary and guestbook online at www.mourning.com Martin & Castille-DOWNTOWN-330 St. Landry St., Lafayette, LA 70506, 337-234-2311

Funeral services will be held on Friday, November 20, 2020 at 2:00 PM in Martin & Castille's La Chapelle for Walter Hebert, Jr., 75, who passed away suddenly on Sunday, November 15, 2020 at his residence in Lafayette. Deacon Cody Miller will... View Obituary & Service Information

The family of Walter Hebert, Jr. created this Life Tributes page to make it easy to share your memories.