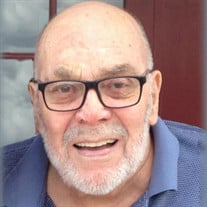 Anthony "Tony" Ledet, 82, died on Saturday, September 18, 2021 at Woodbriar Southern Style Assisted Living and Memory Care in Maurice, Louisiana. Tony Ledet was born and raised on his family farm in Thibodaux, Louisiana. He was the oldest of 3 siblings, a brother, Winston Ledet and a sister, Linda Levert. He attended Thidodaux High School where he was a football star. He received a full scholarship to play at SLI, and following his graduation, the Canadian League tried to draft him. He wanted to stay near his family in Louisiana. He was a member of the SkiBee team and President of the Letterman’s Club at USL. He graduated with a degree in Petroleum Engineering and went on to work in the oilfield all of his life, which took him to places all over the world. Tony loved hunting, fishing, cooking, riding horses and dancing. He enjoyed spending time with his family, he had a knack for making people smile, always had a joke for any occasion, and he could tell stories. Tony was a devout Catholic who loved his faith. He was a very tough man who survived an accident with a seaplane propeller and 15 back surgeries. Survivors include one son, Lonny Ledet; three daughters, Leah Terro and her husband Lenny, Liz Romero and her boyfriend, David Anslem, and Laurie Manafi and her husband Jason. six grandchildren: Joshua Ledet, Alyse Evans and her husband Lance, Nicholas Terro and his wife Victoria, Reagan Romero and her boyfriend Riley Nezat, Chase Manafi, and Christian Manafi; two great grandchildren; Cadence Ledet, Dawson Evans, and 2 on the way, Clark Evans and Olivia Terro; a step-grandson, Anthony Leach; his siblings, Winston Ledet and his wife June and Linda Levert and her husband Lawrence; and his step-mother, Mae Ledet. He was preceded in death by his parents, Rene Charles Ledet and Myrtle Marie Samanie Ledet; and one great grandson Deacon Evans. A Memorial Mass will be held on Friday, September 24, 2021 at 2:00 P.M. in St. Joseph Catholic Church in Milton. The family requests that visitation be observed on Friday at Church from 12:00 P.M. until time of services. A Rosary will be prayed at 1:00 P.M. in St. Joseph Catholic Church. Lectors will be Leah Terro and Chase Manafi. Gift Bearers will be Josh Ledet, Alyse Evans, Nick Terro, Reagan Romero, Chase Manafi, Christian Manafi. Jodi Bollich, organist and soloist, will sing for the services, "Amazing Grace", "Psalm 25; To You, O Lord I Lift My Soul", "I Can Only Imagine", "Hallelujah", and "On Eagles' Wings". Pallbearer will be Lonny Ledet. Honorary Pallbearers will be Lenny Terro, David Anslem, and Jason Manafi. A heartfelt appreciation is extended by the Ledet family to the nurses and staff of Woodbriar Southern Style Assisted Living and Memory Care and Nursing Specialties for their kindness, compassion, and gentle care given to Mr. Ledet and his family during their time of need. View the obituary and guestbook online at www.mourning.com Martin & Castille-SOUTHSIDE, 600 E. Farrel Road Lafayette, LA. 70508 337-984-2811

Anthony "Tony" Ledet, 82, died on Saturday, September 18, 2021 at Woodbriar Southern Style Assisted Living and Memory Care in Maurice, Louisiana. Tony Ledet was born and raised on his family farm in Thibodaux, Louisiana. He was the oldest... View Obituary & Service Information

The family of Anthony "Tony" Ledet created this Life Tributes page to make it easy to share your memories.

Send flowers to the Ledet family.