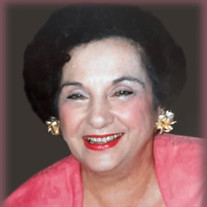 Funeral services will be held on Tuesday, November 2, 2021, at a 10:00 AM Mass of Christian Burial in the Cathedral of St. John the Evangelist for Mrs. Antoinette “Ann” Antoine Boustany, age 99, who died Wednesday, October 27, 2021, in Houston, Texas. Entombment will be in the St. John Cemetery Mausoleum. The Very Reverend Chester C. Arceneaux, VF will be the Celebrant of the Funeral Mass and will conduct the services. The Lectors will be her granddaughters, Christy Boustany Mims and Rachel Smythe LeClaire. Giftbearers will be her granddaughters, Kathy Bowen Daughtery, Karoline Bowen Jones, Lauren Atkins Rinehart, Michelle Atkins Staples and Mary Shannon Ann McConaty. The Eulogy will be given by her son, Dr. Francis E. Boustany, Jr. Karen Broussard, vocalist, accompanied on the organ by Tom Niel, will sing for the services, Be Not Afraid, You Are Near, The Prayer of St. Francis, Ave Maria, The Lord’s Prayer and On Eagles' Wings. Facebook live link: https://www.facebook.com/groups/1240670779740208/permalink/1240679413072678/ Survivors include one son, Dr. Francis E. Boustany, Jr. and his wife, Connie, of Lafayette; five daughters, Mary Ann B. Boehm and Frank H. Boehm III of New Orleans, Elizabeth Bowen and her husband, Kris, Marie "Tina" Simon and her husband, John, Sandra McConaty and her husband, Brady, and Rebecca Smythe and her husband, Steve, all of Houston, TX; fourteen grandchildren, Frank H. Boehm IV, Christy Boustany Mims (Andrew), Francis E. Boustany III, Kris Bowen, Jr.(Andrea), Kathy Bowen Daughtery(Craig), Karoline Bowen Jones(Matthew), Lauren Atkins Rinehart(Clem), Michelle Atkins Staples(Zach), Paul Simon, Brady J. McConaty, Jr., Mary Shannon Ann McConaty, Stephen Smythe, Jr., Matthew Smythe, and Rachel Smythe LeClaire(Cameron); twelve great grandchildren, Andrew Mims, Jr., William Mims, John Luke Mims, Eli Bowen, Ava Daughtery, Bowen Daughtery, John David Jones, Rosemary Jones, Lucille Rinehart, Stella Rinehart, Savannah Staples, Rowdy Staples; and numerous nieces and nephews. She was preceded in death by her husband of 50 years, Francis E. Boustany, Sr.; her parents, Joseph Stephen Antoine and the former Mathile Marie Hannie; one sister, Adele and two brothers, Stephen Antoine and his wife, Anita, and A. J. Antoine and his wife, Sally, and two nephews, Michael J. Antoine, and Stephen Antoine, Jr., and one great-nephew, Jacob Antoine. Mrs. Boustany was a native and lifelong resident of Lafayette. At the early age of 11, her mom died suddenly which deeply impacted her life. She quickly took on the role of mother for her two younger brothers and helped motivate them to pursue a college education. Later she married Francis Boustany, whom she had known her whole life, and together they celebrated 50 years of marriage. Her strong Catholic faith gave her strength to be a wonderful wife and loving mother to six beautiful children who all fulfilled her wish by graduating from college and beyond. Not having a mother in her life after age 11, she was often asked where she learned how to raise children. Her response was always, “I prayed a lot.” Ann always had a way to bring a smile to people’s faces, whether it was in her kitchen while quickly whipping up a gourmet meal for the masses, or by hearing her contagious laugh and seeing her beautiful smile. She loved her family unconditionally. Ann truly was a joy to be around - whether it was going out to eat crawfish or crabs, going to the casino, or taking wonderful vacations, she made life better for everyone around her and brought joy. However, the gift that seems to resonate more than any is how she made people feel. Her warmth and love, along with her personable nature allowed her to see the good in everyone and made people feel valued. She will be sorely missed. The family would like to acknowledge and thank our dedicated caregivers DeShaun Brewer, Reina Luna, and Gina Juarez, who have cared for Ann in the last four years in Houston, Texas. Visiting hours will be observed in Martin & Castille's DOWNTOWN location on Monday from 5:00 pm until 8:00 pm and will resume on Tuesday from 8:00 am until time of the services. A Rosary will be recited by her son-in-law, Brady McConaty, at 6:30 pm on Monday, November 1, 2021, in Martin & Castille Funeral Home. Pallbearers will be her grandsons, Frank H.Boehm, IV, Francis E. Boustany, III, Kris Bowen, Jr., Paul Simon, Brady J. McConaty, Jr., Stephen Smythe and Matthew Smythe. Honorary pallbearers will be her son-in-laws, Frank H. Boehm, III, Kris Bowen, Sr., John Simon, Brady McConaty and Steve Smythe. View the guestbook and obituary online at www.mourning.com. Martin & Castille-DOWNTOWN, 330 St. Landry Street, Lafayette, LA 70506, 337 234-2311.

The family of Antoinette Antoine Boustany created this Life Tributes page to make it easy to share your memories.

Send flowers to the Boustany family.