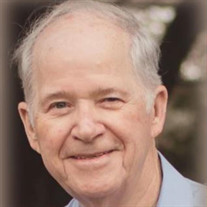 A Mass of Christian Burial will be held on Thursday, April 28, 2022 at 3:00 PM in the Cathedral of St. John the Evangelist Catholic Church in Lafayette, for Cifroyen James "C.J." Richard, 87, who passed away on Friday, April 22, 2022, surrounded by his family. The family requests that visitation be observed in the Cathedral of St. John the Evangelist Catholic Church from 1:00 PM to time of services, with a Rosary being prayed at 1:30 PM in the Church. A private graveside service will follow in St. John Cemetery Mausoleum. Reverend Neil Pettit, Pastor of St. Landry Parish Catholic Church in Opelousas, will serve as Celebrant of the Mass and conduct the funeral services. Left to cherish his memory is his beloved wife of almost 65 years, Helen Touchet Richard; his daughters, Mitzi Richard Domino and husband, Frankie, and Kathleen Richard Huckabay and husband, Brit; his grandchildren, Natalie Domino Person (Major), Frank Nicholas Domino (Julia), Callie Huckabay, and Hunter Huckabay; his great grandchildren, John Domino, Beau Person, Catherine Domino, Cora James Person, and Ford Person. He was preceded in death by his parents, Arville and Adelina Meche Richard; siblings, John Dormas Richard, Louis Richard, Alphonse Richard, Anna Mae Richard Touchet, Anne Richard Burleigh, Adelie Richard Brasseaux, Mary Richard Rogers, Josephine Richard Gaspard, Agnes Richard Menard; and his grandson, Briton Huckabay. C.J. served his country proudly in the United States Air Force, serving in Puerto Rico during the Korean Conflict. Professionally, C.J. worked for various Oil Field Companies as an accountant, notary public, comptroller and consultant. He taught his children the value of hard work and a good work ethic. C.J. was an amazing and loving husband, father, grandfather, and great grandfather. He has always been generous with his love and affection and there is no doubt he sacrificed what he wanted personally for his family's benefit. He taught his family to believe in a loving, unconditionally generous sacrificing God. He was a calming voice in times of strife. He could tinker and fix anything, especially broken hearts. He nurtured his children, and also his grandchildren and his great-grandchildren. He and Helen never missed a grandparents day or a high school graduation for any of their 5 grandchildren, for those who lived in Lafayette or those 8 hours away in Birmingham. He has been a role model in what a man, a husband, a father, and grandfather, should be. He was never judgmental and has always shown us the best in ourselves. Consistent in his love of God, country, and family - he was patient, kind, and generous. A most valuable lesson he taught was to never compare yourself with others - only to look at those less fortunate and do something to help. Our hero doesn’t wear a cape, but we believe he has earned a halo. Pallbearers will be Frankie Domino, Brit Huckabay, Frank Nicholas Domino, William Major Person, and Hunter Huckabay. Honorary Pallbearers will be Briton Huckabay and Russell Mire. In lieu of flowers, memorial contributions can be made in Mr. Cifroyen Richard's name to the Carmelite Monastery, 1250 Carmel Drive, Lafayette, Louisiana, 70501 or a charity of your choice. A heartfelt appreciation is extended by the Richard family to Bridgeway Hospice and his dedicated caregivers, Rita LaCaze, Catrina Boudreaux, Amanda Cole, Dana Guidry, Melanie Simoneaux, Brenda Fuselier, and to all caregivers that have tended to C.J. in his time of need. A special thank you to the nurses and staff of The Blake at Lafayette for welcoming the Richard family as their own at the many events they hosted, allowing C.J.'s grandchildren and great grandchildren to be present in his life. Your kindness, compassion, and open arms were truly a comfort to the family. The family of C.J. Richard would like to thank you for helping us celebrate the life of our beloved one. Special thanks for those individuals who offered prayers and support, sent flowers, plants, supplied food, and gave donations. Your generosity has been overwhelming. View the obituary and guestbook online at www.mourning.com Martin & Castille-DOWNTOWN-330 St. Landry St., Lafayette, LA 70506, 337-234-2311

A Mass of Christian Burial will be held on Thursday, April 28, 2022 at 3:00 PM in the Cathedral of St. John the Evangelist Catholic Church in Lafayette, for Cifroyen James "C.J." Richard, 87, who passed away on Friday, April 22, 2022, surrounded... View Obituary & Service Information

The family of Cifroyen James "C. J." Richard created this Life Tributes page to make it easy to share your memories.

A Mass of Christian Burial will be held on Thursday, April 28,...

Send flowers to the Richard family.