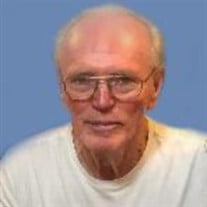 A Mass of Christian Burial will be held for Mr. Clarence "Butch" Koning at 1:00 PM on Saturday, October 16, 2021 at St. Joseph Catholic Church in Milton. While surrounded by his loving family, Butch went home to be with the Lord on Thursday, October 14, 2021 in the comfort of his home. The family requests that visitation be observed in Martin & Castille's SOUTHSIDE location on Saturday, October 16, 2021 from 9:00 AM until time of services at 1:00 PM. A Rosary will be prayed by Mr. Voorhies Short on Saturday, October 16, 2021 at 11:00 AM in Martin & Castille Funeral Home. Entombment will be in St. Joseph Cemetery. Reverend William Schambough, Pastor of St. Joseph Catholic Church in Milton, will conduct the funeral services. At the age of 80, Butch has lived a fulfilled and loving life. Born and raised in the area of Freeport, Illinois, his greatest memories were spending time with childhood friends and family. From working in the corn fields, to rolling vehicles at 80 mph, he sure knew how to live life to the fullest. He attended Forreston High School where he played basketball, football and ran track. He enjoyed watching his nieces and nephews, knocking over pink flocked Christmas Trees, and being a member of a bowling league. After graduation, he proudly enlisted in the United States Army where he learned the skills of seismograph. As a doodlebugger, he was led to Louisiana where he planted his roots and raised his family. By far his greatest passion was his grandkids and great-grandkids. Just to see them smile, he would spend days building an elaborate Department 56 Christmas Village and putting up Christmas lights around the house. He enjoyed sharing Chips Ahoy cookies and ice cream with them, but was skimpy handing out Halloween Candy. Sunday's were meant for church, blueberry donuts, and football. One of the memories his daughter cherishes the most are the walks around the pond feeding the fish and ducks. Although he is no longer with us, he has created lasting memories that his family will always treasure. Left behind to cherish his memory is his daughter, Tamila Dawn "Tammy" Foote (Byron); his son, Greg Miller (Sue); his son, David Sprowl (Lena); his grandchildren, Kelly Rae Falcon (Karry), Dustin Koning (Macie), Amanda Koning (Logan), Samantha Bryan (Caleb), Sarah Sprowl and Bennett Hawks; his great-grandchildren, Jillian "JJ" Falcon, Austyn Rae "Peanut" Falcon, Rowen Walker, Dawson Koning, Juliet Koning, and Zoey Bryan; his sister, Alice Koning Truckenmiller; his sister-in-law, Carol Koning; six nieces and five nephews. He was preceded in death by his parents, Mr. Aaron Koning and Mrs. Helen Kraft Koning; his siblings, Kenneth Koning, Shirley Rife, Mike Koning, Maurice Koning, Margaret Koning, Ruth Ann Koning and Arthur Lee Koning. Upholding the honor of pallbearers will be Karry and Kelly Falcon, Amanda Koning, Dustin Koning, Byron and Tammy Foote. Honorary Pallbearer will be Logan Romero. A heartfelt appreciation is extended by the Koning family to Heart of Hospice and especially to the two special nurses that cared for him during his hospital stay. View the obituary and guestbook online at www.mourning.com Martin & Castille-SOUTHSIDE-600 E. Farrel Rd., Lafayette, LA 70508, 337-984-2811

A Mass of Christian Burial will be held for Mr. Clarence "Butch" Koning at 1:00 PM on Saturday, October 16, 2021 at St. Joseph Catholic Church in Milton. While surrounded by his loving family, Butch went home to be with the Lord on Thursday,... View Obituary & Service Information

The family of Clarence "Butch" Koning created this Life Tributes page to make it easy to share your memories.

A Mass of Christian Burial will be held for Mr. Clarence &quot;Butch&quot;...

Send flowers to the Koning family.