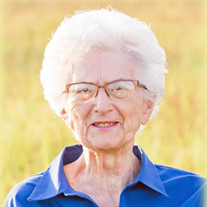 Funeral Services will be held on Monday, December 14, 2020, at 11:00 AM in Sacred Heart of Jesus Catholic Church of Broussard for Earlene Bernard Domingue, 86, who died on Saturday, December 12, 2020, after a (second) hard fought battle with cancer. She was blessed to be surrounded by her family in her home with lots of love, prayers, and beautifully peaceful final moments. Entombment will be in Sts. Peter & Paul Mausoleum. Reverend Fr. Kyle White, Parochial Vicar of Sacred Heart Church in Broussard, will conduct the funeral services. Fr. White shared a special evening with Mrs. Domingue in her final days as he anointed her, administered her last Eucharist, and invited the Holy Spirit into her journey home; which left a lasting impression upon her and her family. For family members and friends who are unable to attend on Monday, December 14, 2020 at 11:00 AM, the service will be live-streamed to a Memorial Facebook Group dedicated to Earlene Bernard Domingue. To join the group, click the link below and then "join group". The video will appear on this group at service time 11:00 AM. You may also share memories, pictures and condolences to the family in this group. Facebook link: www.facebook.com/groups/earlenedomingue/ Survivors include two daughters, Connie Cunningham and her husband Charles, Chris Perrin and her husband David, of Scott; five grandchildren, Ashley Faulk and husband Kip, Justin Lege and wife Danielle, Keri Lege, Lance Bordelon and his partner Sebastiano Camatti, and Jacob Cunningham; and eight great grandchildren, Lily Faulk, Addyson Faulk, Cecile Faulk, Katherine Faulk, Kailyn Lege, Ella Lege, Owen Lege, and Evelyn Lege. She was preceded in death by her husband of 62 years, Harris "Totis" Domingue, Jr. Mrs. Earlene was a woman of great faith, which carried her in times of immense suffering amidst several health challenges over the years. She defeated Stage 4 Breast Cancer in 1993 and lived to see her grandchildren and great-grandchildren frequent her home with all the excitement and love that a devoted family can offer. She cherished the time spent with her husband in their early years of marriage traveling the country and making memories, as well as their years later in life following their favorite Cajun bands around Acadiana and wearing out the dance floor. She adored her family and gave most of herself to motherhood and being an involved grandmother who “loved the little children” more than life itself at times. She often reflected on her years being a band parent at Carencro High School, teaching Religion in the CCD program at church, and the memories made hosting a rosary group in her home for decades. Her hobbies included flower gardening, sewing, cooking, reading, and collecting photographs of her family life to build numerous albums and fill frames across her home. She was a spirited woman who never shied away from giving her input or sharing her opinion, often times speaking French when she really had something to say that was not suitable for little ears to here. This little feisty Cajun lady graced many with her “spunk” and became the backbone of the endurance she would need in the final months of her fight with cancer that returned with a vengeance in 2016. Her unconditional love, generous heart, and immeasurable strength will be missed dearly by her family, who cherishes her example of grace and courage in suffering that she modeled so beautifully. Those surrounding her for her final breaths rest in great comfort knowing that her pain has ended, and she is resting peacefully with the Lord; which Mrs. Earlene would probably give a wink to and say “mais ça c'est bon”. She was a selfless caregiver to many family members. Pallbearers will be Justin Lege, Jacob Cunningham, Lance Bordelon, Charles Cunningham, David Perrin, and Timothy Lege. The family requests that visitation be observed in Martin & Castille's SOUTHSIDE location on Sunday from 5:00 PM to 9:00 PM and will continue on Monday from 8:00 AM to 10:30 AM until time of departure for services. A Rosary will be prayed on Sunday at 6:30 PM in Martin & Castille Funeral Home. Memorial contributions can be made in Mrs. Domingue's name for Masses to be said for her family at Sts. Peter and Paul Church in Scott, P.O. Box 610 Scott, Louisiana 70583. A heartfelt appreciation is extended by the Domingue family to Bridgeway Hospice and her nurse Crystal Schexnayder, Dr. Lewis Hill, the late Dr. Michael McElderry and staff at CIS, Dr. Joseph E. Brierre, and Fr. Manny Fernandez. View the obituary and guestbook online at www.mourning.com Martin & Castille-SOUTHSIDE, 600 E. Farrel Road Lafayette, LA. 70508 337-984-2811

Funeral Services will be held on Monday, December 14, 2020, at 11:00 AM in Sacred Heart of Jesus Catholic Church of Broussard for Earlene Bernard Domingue, 86, who died on Saturday, December 12, 2020, after a (second) hard fought battle with... View Obituary & Service Information

The family of Earlene Bernard Domingue created this Life Tributes page to make it easy to share your memories.