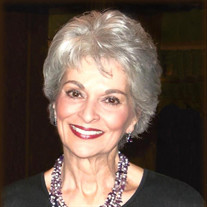 Faith Mensman Bertrand, 77, of Lafayette, Louisiana passed away surrounded by loved ones on January 21, 2021 after receiving hospice care. She died peacefully in her sleep. Faith was born on November 30, 1943 to Fred Allen and Virginia “G” Nuttall Mensman of Patterson, Louisiana, where she worked in her family’s restaurant, Fred Allen’s Cafe. After graduating from Patterson High School, Faith moved to New Orleans where she began her banking career in 1961 at the American Bank of New Orleans. When she moved to Lafayette, Louisiana in 1968, Faith got a job at Guaranty Bank, where she spent the next 17 years holding various positions with the bank. Faith attended Our Lady of Fatima Catholic Church where she also worked in the rectory and served as a Eucharistic Minister. Having lived in Louisiana all of her life, Faith loved attending Mardi Gras festivities and supporting her late husband J. Rayburn Bertrand, who was a past King of the Krewe of Attakapas and King Gabriel XLII. Faith loved living in Lafayette and thoroughly enjoyed putting on her best and going to the Petroleum Club where she visited with friends and always ate what she described as “the best fried chicken in town.” Faith moved to Lexington, South Carolina in 2016 to live with her daughter, son-in-law, and her three grandchildren. While in South Carolina, Faith and her family took many trips to the beach and the mountains, including their last trip to explore the Biltmore Estate in Asheville, North Carolina. Faith was the best mother and grandmother anyone could ask for. She was loved by so many and she will be dearly missed by all. Faith was preceded in death by her late husband John Rayburn "Ray" Bertrand, her first husband W. W. “Bosco” Whelchel, and her mother and father. Faith is survived by her only daughter, Dana Faith Whelchel Holladay, her husband James V. Holladay III, and her three grandchildren: Faith JoAnn Holladay, Lillian Grace Holladay, and Seaver James Holladay of Lexington, SC.; her three sisters: Lynn Eagles and her late husband M.E. “Bo” Eagles of Houston, TX, Mary Blackman and her husband Mike Blackman of Hempstead, TX, and Eleda Murray and her husband Charles Murray of Giddings, TX; a step daughter, Cheryl Bertrand Dailey and her husband Howard Dailey of Lafayette, LA; and her step grandchildren J. Michael Whittenberg, Jr., his wife Suzanne Whittenberg, and their two children Amanda Whittenberg Pillette and J. Michael Whittenberg, III of Youngsville, LA, and John Rayburn Whittenberg, his wife Joanne Eues Whittenberg, and their son Charles Rayburn Whittenberg of Lafayette, LA. Funeral services will be held on Wednesday, January 27, 2021, at a 1:30 P.M. Mass of Christian Burial in the Cathedral of St. John the Evangelist. Interment will be in St. John Cemetery. Reverend Bryce Sibley, Pastor of Our Lady of Wisdom Catholic Church, will be the Celebrant of the Funeral Mass and will conduct the funeral services. The Altar Server will be Brandt Anthony Dupuis. Lectors will be Janese Dupuis and Carlissa Patin and the Giftbearers will be Amanda Whittenberg Pillette, Suzanne Whittenberg and Joanne Eues Whittenberg. Pallbearers will be J. Michael Whittenberg, Jr., J. Michael Whittenberg, III, John Rayburn Whittenberg, Charles Rayburn Whittenberg, Troy Joseph Dupuis and Landon Joseph Dupuis. The family requests that visitation be observed in Martin & Castille's DOWNTOWN location on Wednesday from 10:00 AM until 1:15 PM when we proceed to the Cathedral. Memorial contributions can be made in Faith's name to the American Heart Association, www.heart.org/donate or American Cancer Society, www.cancer.org/donate View the obituary and guestbook online at www.mourning.com Martin & Castille-DOWNTOWN-330 St. Landry St., Lafayette, LA 70506, 337-234-2311

Faith Mensman Bertrand, 77, of Lafayette, Louisiana passed away surrounded by loved ones on January 21, 2021 after receiving hospice care. She died peacefully in her sleep. Faith was born on November 30, 1943 to Fred Allen and Virginia &#8220;G&#8221;... View Obituary & Service Information

The family of Faith Mensman Bertrand created this Life Tributes page to make it easy to share your memories.

Send flowers to the Bertrand family.