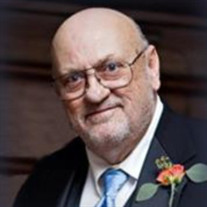 A Mass of Christian Burial will be held on Thursday, March 31, 2022 at 10:00 AM in St. Pius X Catholic Church in Lafayette, for George Timothy "Tim" Langlinais, age 80, who passed away Saturday afternoon, March 26, 2022 in Lafayette. The Langlinais family will receive family and friends in Martin & Castille's DOWNTOWN location on Wednesday from 4:00 PM to 8:00 PM and will continue on Thursday from 8:00 AM until time of services. A Rosary will be prayed on Wednesday evening at 7:00 PM in the funeral home by the Men's ACTS Group from St. Pius X Catholic Church. Interment will be in Lafayette Memorial Park Cemetery. Reverend James Brady, JCL, Pastor of St. Pius X Catholic Church, will serve as Celebrant of the Mass and conduct the funeral services. Survivors include his spouse and mother of his children, Dorothy Dianne Langlinais; his daughter, Michelle Raborn and husband Boyd Raborn of Lafayette; his two sons, Craig Langlinais of Hotchkiss, Colorado, and Mark Langlinais of Lafayette; his grandchildren, Lani Louk (Jon), Brun LaVergne (Tai), Gunnar Raborn, Bailey Raborn, Andrew Langlinais, and Trent Langlinais; his great-grandchildren, Cohen LaVergne, Celia LaVergne, Carter Louk, and Liberty Louk. He was preceded in death by his parents, L.E. Langlinais and Marjorie Bernard Langlinais; and his brother, L.E. "Butch" Langlinais. Tim was retired having worked as an accountant for numerous years. He served as the vault manager for Guaranty Bank and as money manager of Evangeline Downs. He also worked for Greene's Pressure Testing for many years, leaving there to work in the family grocery business. When Tim retired, he was the office manager for his daughter and her husband Boyd of RAH Homes and Construction for over 18 years. He served as past president of the Jaycees-1972, also as a state officer for them, and a founding member of the Cajun RC Club. Tim loved music and in his early years he and his brother founded a band, The Continentals, playing as their bass guitarist. Later in his 60's, he was a member of another band, Second Time Around. A heartfelt appreciation is extended by the Langlinais family to Helen and Michael Breaux for their lifelong friendship and the unwavering support and care they offered. Also to his nurse, Leslie Carrere with Nursing Specialties, and to Hope Bearb for everything you did to make our father's life easier. View the obituary and guestbook online at www.mourning.com Martin & Castille-DOWNTOWN-330 St. Landry St., Lafayette, LA 70506, 337-234-2311

A Mass of Christian Burial will be held on Thursday, March 31, 2022 at 10:00 AM in St. Pius X Catholic Church in Lafayette, for George Timothy "Tim" Langlinais, age 80, who passed away Saturday afternoon, March 26, 2022 in Lafayette. The Langlinais... View Obituary & Service Information

The family of George "Tim" Langlinais created this Life Tributes page to make it easy to share your memories.

A Mass of Christian Burial will be held on Thursday, March 31,...

Send flowers to the Langlinais family.