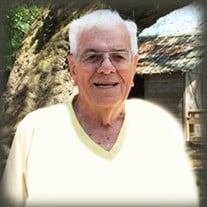 A Memorial Mass will be held on Friday, October 2, 2020 at 10:00 AM at St. Mary, Mother of the Church in Lafayette for Glenn Colomb, 87, who died peacefully on September 28, 2020. Reverend Gregory Heslip, LC, will be the Celebrant of the Mass and will conduct funeral services. A Rosary will be offered at 9:30 AM. Visitation will begin at 9:00 AM at the church. Glenn was born in Lafayette November 26, 1932. While a young boy, his father Louis was killed in an industrial accident, and he was raised by his mother Alma with 7 siblings in a two-bedroom on East Vermillion Street. He attended Lafayette Elementary and Lafayette High, and went on to serve in the U.S. Army in 1950. Upon his return, he enrolled in Southwestern Louisiana Institute on the G.I. Bill. After earning a Geology degree, Glenn married Judy Begnaud in 1957, and moved to Wichita Falls, Tx where he worked the oil fields of West Texas for Halliburton, and where Judy gave birth to four Texan children of Louisianan bloodline. After sufficient fill of the desert summers, ice winters, and tornado sirens of Wichita Falls, the family returned to his native Lafayette, where Glenn continued his work in the oil & gas service industry with Completion Services, Inc., and Judy made their home. Glenn’s loves included family, tennis, encouraging generally-harmless mischief, fat squirrels, swings by the Vermillion River, yard-work and woodworking. He sacrificed his left thumb to his woodworking, twice! If you come across a roughly constructed, soul-grabbing mahogany cross or grotto with the imprint of GOP stamped quietly in the corner, you will have seen one of the hundreds of pieces he so graciously sowed in the area. His grandchildren called him Gop, and really so did just about anyone under the age of 60 who knew him. He loved to tell and hear stories of people and of his family - he especially loved tales of ‘almost getting caught’. In the family, if you wanted an opinion, Gop was not your source. His opinions he kept, your opinions he praised. But, seemingly as if by a mind-trick, you would walk away with a better opinion or feeling, without recognizing what Gop had said to change you. Your mind was yours to change, and he allowed you the space to do it. Glenn is survived by three children and their spouses, Lisa Summers married to Bill, Keri Lavergne married to Murph, and Kevin Colomb married to Mindy; a brother Russell Colomb; a brother-in-law Pete Gerac; 14 grandchildren: Beth Summers Cole married to Steven, Matthew Lavergne, Katie Summers Caseres married to Robert, Jonathon Summers, Mikey Saab, Adam Lavergne, Annie Saab Clark married to Nick, Jenny Summers Guillot married to Gavin, Drew Saab, Sam Colomb married to Allison, Phillip Lavergne, Stephen Colomb married to Courtney, Camille Colomb, and Claire Colomb; and 12 great-grandchildren. Glenn was preceded in death by his wife of 60 years Judy Begnaud Colomb, his daughter Lori Colomb Saab, his parents and siblings: Kenneth Colomb and wife Beverly, Betty Colomb Ferguson and husband Joe Rice, Elaine Colomb Breaux and husband Frank, Patsy Colomb Robicheaux and husband Bill, Burl Colomb, Sandra Colomb Gerac; and sisters-in-law Beverly Guilliot Colomb, Joanne Begnaud Gankendorf and husband Alan; and brother-in-law Wayne Begnaud and wife Mac. The family wishes to acknowledge the staff and residents at The Blake, all of whom helped add richly to our father’s life over the last few years. Also much gratefulness for the doctors and nurses of Lourdes ICU and Pelican Point who cared for our father as one of their own in this crazy pandemic. In lieu of flowers, donations may be made to Catholic Charities of Southwest Louisiana, 1225 2nd Street, Lake Charles, LA 70601. View the obituary and guestbook online at www.mourning.com Martin & Castille-DOWNTOWN-330 St. Landry St., Lafayette, LA 70506, 337-234-2311

A Memorial Mass will be held on Friday, October 2, 2020 at 10:00 AM at St. Mary, Mother of the Church in Lafayette for Glenn Colomb, 87, who died peacefully on September 28, 2020. Reverend Gregory Heslip, LC, will be the Celebrant of the Mass... View Obituary & Service Information

The family of Glenn Colomb created this Life Tributes page to make it easy to share your memories.

Send flowers to the Colomb family.