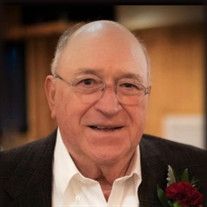 Funeral services will be held on Monday, February 14, 2022, at a 2:00 pm Mass of Christian Burial in Sts. Peter & Paul Catholic Church in Scott for Ivan James “Jimmy” Domingue, 84, who passed away on Thursday, February 10, 2022, at his residence in Scott surrounded by his family. Entombment will be in Sts. Peter & Paul Mausoleum. Reverend Gilbert Dutel, retired priest of the Diocese of Lafayette, will conduct the funeral services. Survivors include his beloved wife of 63 years, Gloria Bertrand Domingue; his four daughters, Katrina Domingue Prejean and her husband, Craig, Sondra Domingue Troglen and her husband, David, Vicky Domingue Duhon and her husband, Shelly, Falecia Domingue Parria and her husband, Michael; and one son Ricky Domingue; eleven grandchildren; eleven great grandchildren. He was preceded in death by his parents, Dona Dieu “Doc” and Anita Breaux Domingue; his sister, Lernell Domingue Lormand and her husband, Linden; one son Dwayne Domingue; and two grandchildren Corey Prejean and Megan Troglen. Ivan James Domingue passed away 5 days before his 85th Valentine’s Day birthday after a challenging and heroic battle of dealing with Alzheimer’s. Also affectionately known as “Daddy” “Poppop”, “Jimmy” and “Doc”, he adored his wife of 63½ years and was dedicated and devoted to his children, grandchildren, great grandchildren, family and friends. He had a way of making everyone feel special, welcomed and happy to be in their presence. He was courteous, friendly, fun-loving and never met a stranger that he wouldn’t engage in conversation with or try to make some sort of connection. He brought laughter and contagious joy with his storytelling and smiles. His happy-go-lucky disposition, easy-going personality, joyful whistling and unconditional love for everyone attributed to him being such a sweetheart, so how appropriate that he was born on Valentine’s Day! Besides always trying to accommodate his wife and family by chauffeuring them around or running the roads with errands, he also had many hobbies and enjoyed anything outdoors such as fishing, hunting, swimming, gardening, cooking, Bar-B-Quing, canning, making Chow Chow, woodworking, welding, and caring for his crawfish or catfish ponds. He was especially successful in cooking Cajun food and delicious jambalaya. He also grew the most beautiful strawberries, figs, merlitons, and other vegetables and plants. He was admired tremendously by his family, especially his sons-in-law and was considered to be a “Jack-of-all-trades” and a handyman that seemed to know something about so many things, especially considering that he never owned a computer, iPhone or utilized google. His family marveled over his talent and ingenious ability to invent, create, and build things that will be treasured forever. He was gifted with his hands and made many things including cast nets and a beautiful huge lazy susan dining table where many meals, coffee and fellowship took place. His incredible organizational, problem solving, and record keeping skills, as well as his memory of dates, people, and events was amazing and a tremendous asset. He attended and graduated from Scott High School and was a lifelong parishioner and Usher of Sts. Peter & Paul Church. He achieved many accomplishments and awards during his service throughout his work career. He was dedicated in a 35-year career as a Maintenance Mechanic and Pipe Fitter for Freeport-McMoran, and also served as a Medic. He proudly served his country for 42 years in the Army National Guard and earned the title of Sergeant Major E-9. He was a Lion’s Club Volunteer and enjoyed selling lion’s club dinners, staying up all night cooking the meals, and delivering them. He was so loved and will be desperately missed, but his memory and the wonderful memories he left us when he videoed the events and activities of our lives will sustain us and remain in our hearts forever. He blessed us and he was a blessing to us! He built a beautiful legacy of love. We are eternally grateful to God for the influence he had on our lives and in the world. One of the last complete sentences he spoke was, “why worry, when you can pray”. May God rest his soul. Pallbearers will be Ricky Domingue, Craig Prejean, Caleb Prejean, David Troglen, Dillon Y’Barbo, and Michael Parria, Jr. Honorary Pallbearers will be Jace Lormand, Brandon Carline, Caiden Carline, Bayson Carline, and Shelly Duhon. The family requests that visitation be observed in Martin & Castille's SCOTT location on Monday, February 14, 2022, from 9:00 am until time of services. A Rosary will be prayed on Monday morning at 11:00 am in Martin & Castille Funeral Home. A heartfelt appreciation is extended by the Domingue family to the doctors, nurses, and staff of Hospice of Acadiana for their kindness, compassion and wonderful care given to Mr. Domingue and his family. View the obituary and guestbook online at www.mourning.com Martin & Castille-SCOTT-802 Alfred St., Scott, LA 70583, 337-234-2320

The family of Ivan James "Jimmy" Domingue created this Life Tributes page to make it easy to share your memories.