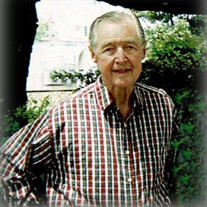 Funeral services will be held on Thursday, July 29, 2021, at a 2:00 pm Liturgy of the Word in Martin & Castille Funeral Home, DOWNTOWN for James S. Fitzgerald Sr., 97, who passed away on July 25, 2021, at his residence in Lafayette. Interment will be in Lafayette Memorial Park Cemetery. Reverend Cedric Sonnier, Pastor of St. Mary Mother of the Church Catholic Church in Lafayette, will officiate the funeral services. Survivors include three sons, James S. Fitzgerald, Jr. and wife, Cathy of Pelham, Alabama, Thomas Fitzgerald of Youngsville and John Fitzgerald of New York, NY; four grandchildren, Scott Fitzgerald and his wife Maine of Zachary, Jeremy Fitzgerald and his wife, Aleea of Corpus Christi, Rachael F. Jackson of Indian Springs Village, AL and Paige F. Klein and her husband, Steve of Birmingham, AL; three great grandchildren, Caroline Fitzgerald, Nora Jackson and Aliana Fitzgerald; and numerous nieces and nephews, family members and friends. He was preceded in death by his wife, Sybil Rita Begnaud Fitzgerald; his parents, Raymond Fitzgerald and the former Manor Marmion; his sisters, Frances Adcock and Kathleen Alexander; and his daughter-in-law Shirleen Fitzgerald. James S. Fitzgerald, Sr. was born in Havana, Cuba and was a resident of Lafayette for the last ninety years. Mr. James, lovingly known as “Fitz,” was a graduate of Lafayette High School and Southwestern Louisiana Institute, SLI, now UL. A veteran of the military, Mr. Fitzgerald honorably served his country in the U.S. Navy stationed in the Pacific Ocean during World War II, proudly serving on the U.S.S. New Mexico. He loved his garden and shared his love of flowers and vegetables with family and neighbors. Fitz also enjoyed being outdoors and playing with children of all ages, whether family, friends, or neighbors. The family requests that visitation be observed in Martin & Castille's DOWNTOWN location on Thursday, July 29, from 12:00 noon until time of services. A Rosary will be prayed on Thursday at 1:00 pm in Martin & Castille Funeral Home. A heartfelt appreciation is extended by the Fitzgerald Sr. family to Karla Seymour and Deshira Reed, his caregivers, for their compassion and care over the years. View the obituary and guestbook online at www.mourning.com Martin & Castille-DOWNTOWN-330 St. Landry St., Lafayette, LA 70506, 337-234-2311

Funeral services will be held on Thursday, July 29, 2021, at a 2:00 pm Liturgy of the Word in Martin & Castille Funeral Home, DOWNTOWN for James S. Fitzgerald Sr., 97, who passed away on July 25, 2021, at his residence in Lafayette. Interment... View Obituary & Service Information

The family of James S. Fitzgerald Sr. created this Life Tributes page to make it easy to share your memories.