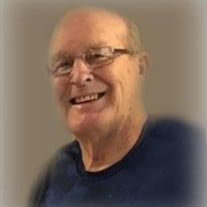 A Celebration of Life Service will be held for Jerry Griffith, Sr. on Saturday, March 19, 2022 at 1:00 PM in the Martin & Castille Funeral Home of Scott. Jerry entered eternal rest on Friday, March 11, 2022. The family requests that visitation be observed in Martin & Castille's SCOTT location on Saturday from 9:00 AM until time of services. A Rosary will be prayed on Saturday at 11:00 AM in the funeral home. A eulogy will be shared by his granddaughter, Monee Griffith. Inurnment will be in Sts. Peter and Paul Mausoleum in Scott on Friday, March 25, 2022 at 3:00 PM. Deacon Cody Miller will conduct the funeral services. Survivors include his daughter, Leah Griffith; his son, Mack Griffith and his wife, Tonya; his grandchildren, Robbie Matte, Monee Griffith, and Trent Griffith; his step-grandchildren, Sarah Demny and Nicholas Demny; his great-grandchildren, Bryson Matte, Ayva Matte, Harley Matte, Brinley Rachal; his step great-granddaughter, Olivia Ardoin; his sister, Glenda Griffith Moss; his step brother, Martin Buford Batchelor, Jr. and his wife Judi; numerous nieces and nephews; and his beloved dog, Jake. He was preceded in death by loving wife of 54 years, Charlotte Ancelet Griffith; his parents, Willis Griffith and Ila Batchelor; his stepfather, Martin Buford Batchelor, Sr.; his in-laws, Ruby "Me" Ancelet and Etta Ancelet; and his sister, Donna Mott. Jerry served his country honorably as a Sergeant during the Vietnam War in the United States Marine Corp. While he was enlisted, Jerry enjoyed playing for the Quantico Marines Devil Dogs Football team. He was a high school football coach at Carencro High School for 10 years. His players were part of his family and he was proud to be called "Coach" by so many of them. Jerry retired after 25 years as the owner of Grifco Inc., an oilfield service company he founded. He enjoyed camping, traveling, and spending time with his family and friends. He will be deeply missed by many friends and his loving family. Pallbearers will be Robbie Matte, Bryson Matte, Trent Griffith, Nicholas Demny, Leslie Moss, and David Moss. A heartfelt appreciation is extended by the Griffith family to the nurses and staff of Southwest Louisiana Veterans Home for their compassionate care during our time of need. Also a very special thanks to Louisiana Hospice for their support and guidance. View the obituary and guestbook online at www.mourning.com Martin & Castille-SCOTT-802 Alfred St., Scott, LA 70583, 337-234-2320

A Celebration of Life Service will be held for Jerry Griffith, Sr. on Saturday, March 19, 2022 at 1:00 PM in the Martin & Castille Funeral Home of Scott. Jerry entered eternal rest on Friday, March 11, 2022. The family requests that visitation... View Obituary & Service Information

The family of Jerry Griffith, Sr. created this Life Tributes page to make it easy to share your memories.

A Celebration of Life Service will be held for Jerry Griffith,...