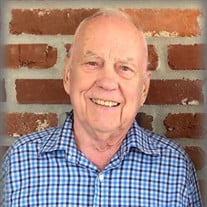 PRIVATE Funeral services will be held in Martin & Castille's La Fleur de Lis Chapel for John Dale "Jack" Walker, age 87, who died on Thursday, January 28, 2021 at Ochsner Lafayette General Medical Center. The family requests that a PUBLIC VISITATION be observed in Martin & Castille's SOUTHSIDE location on Tuesday, February 2, 2021, from 5:00 PM to 7:00 PM. Interment will be in Lisbon Cemetery in Lisbon, Illinois and a Celebration of Life will be held there at a later date. Gene Pinney will conduct the funeral services. For family members and friends who are unable to attend on John Dale "Jack" Walker, at 7:15 PM, the service will be live-streamed to a Memorial Facebook Group dedicated to John Dale "Jack" Walker. To join the group, click the link below and then "join group". The video will appear on this group at service time 7:15 PM. You may also share memories, pictures and condolences to the family in this group. Facebook link: www.facebook.com/groups/johnjackwalker/ Survivors include his beloved wife, Patricia Erickson Walker of Lafayette; his three daughters, Diane Walker Cooper (Gene), Kathleen Walker Pinney (Gene), and Cheryl Walker Frugé (Joel); five grandchildren, Dane Cooper, Miles Cooper, Shelby Frugé, Ann Frugé, and Horatio Pinney. He was preceded in death by his parents, John and Margaret Goode Walker, and his sister, Janice Walker Hall and his best friend, William "Bill" Shannon. Jack was a native of Morris, Illinois and a resident of Lafayette, Louisiana for the past 23 years. Jack graduated from Morris Community High School in 1951. He started working for Caterpillar in Joliet, Illinois and in 1956, he was drafted into the United States Army and was stationed in Fort Stewart, Georgia until his Honorable Discharge from the Army in 1958. After military service, Jack was employed by Rainbo Baking Company in Joliet, Illinois and in 1976 he moved with his family to Baton Rouge, Louisiana, to work for Holsum Bakery, where he worked until his retirement in 1998. While in retirement, Jack enjoyed delivering prescriptions for Acadiana Prescription Shop along with countless favors, repair work, and errands for family and friends. He was truly a Jack-of-all trades. Pallbearers will be Steve Shannon, Don Shannon, Gene Pinney, Gene Cooper, Joel Fruge, Dane Cooper, Miles Cooper, and Scott Darlington. Honorary Pallbearers will be Clayton Darlington, Bill Mitchell, Joe Nelson, Joe Nelson, Jr., Jeff Nelson, John Nelson, Dan Darlington, and Jim Nelson. Memorial contributions can be made in Mr. John Dale Walker's name to the Wounded Warrior Project, www.woundedwarriorproject.org, 4899 Belfort Road, Suite 300, Jacksonville, FL 32256. A heartfelt appreciation is extended by the Walker family to Dr. Michael Alexander and Lauren Aguillard, RN for the care and compassion extended to Jack and the family during this difficult time. View the obituary and guestbook online at www.mourning.com Martin & Castille-SOUTHSIDE-600 E. Farrel Rd., Lafayette, LA 70508, 337-984-2811

The family of John Dale "Jack" Walker created this Life Tributes page to make it easy to share your memories.

PRIVATE Funeral services will be held in Martin &amp; Castille&#39;s...

Send flowers to the Walker family.