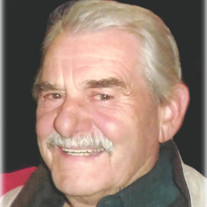 Mr. Joseph Darby Menard, 83, passed away peacefully at home August 30, 2020. A private graveside service will be held at 10:00 AM on Thursday, September 3, 2020 at Sts. Peter and Paul Mausoleum in Scott. Deacon Cody Miller will conduct the graveside service. He was born to Elie and Rosita Menard on September 22, 1936. He was raised in Vatican, LA and graduated from Carencro High School. He then met and married the love of his life, Jenny Hebert. Darby served in the Army National Guard and began his career working for the state in the land survey department. From there he began his lifelong calling as a butcher. He and Jenny opened Darby's Meat Market and Grocery and for the next forty years, served the people of Scott fresh cracklins and his original Darby's sausage. At his core, the store defined him and was a central part of his family's life with his sons all working there growing up. After retiring from the store business, he continued working in the meat department at the Piggly Wiggly in Scott and it wasn't long before people started asking for Darby's sausage. He continued working until his health began failing. The city of Scott will remember him as Mr. Darby. His friends will enjoy the memories of his love for cooking, fishing and sharing good times. His love and devotion to his family was without question and uncompromising. He was a good man and will be missed by all who knew him. He is survived by his loving wife of 61 years, Jenny (Hebert), sons Michael (Sharon), Randy (Shirlene), Joey (Donna), Chip (Jennifer) and daughter Jennifer Mouton (Eric); his grandchildren are Lindsey and Cliff Amox, Randy Menard, Klay Menard and Darion Sonnier, Cole and Emily Menard, Eli and Annie Mouton; his great-grandchildren are Madison, Camille, Benjamin and Spencer. He was preceded in death by his parents, Elie and Rosita Menard and his three brothers, Gervis (Dago), Weston and Kermic. View the obituary and guestbook online at www.mourning.com Martin & Castille-SCOTT-802 Alfred St., Scott, LA 70583, 337-234-2320

Mr. Joseph Darby Menard, 83, passed away peacefully at home August 30, 2020. A private graveside service will be held at 10:00 AM on Thursday, September 3, 2020 at Sts. Peter and Paul Mausoleum in Scott. Deacon Cody Miller will conduct the... View Obituary & Service Information

The family of Joseph Darby Menard created this Life Tributes page to make it easy to share your memories.

Send flowers to the Menard family.