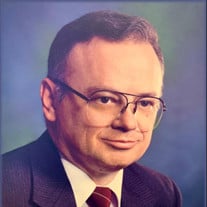 A Memorial Service will be held for Dr. Leopold Richard, Jr., M.D., in La Chapelle de Martin and Castille on Saturday, July 24, 2021, at 1:00 PM. Dr. Richard was 84 when he passed away on Wednesday, July 21, 2021, at his residence while surrounded by his loving family. The family request that visitation be observed at Martin and Castille's DOWNTOWN location on Saturday, July 24, 2021 from 11:00 AM until the time of service at 1:00 PM. Deacon James Davis will be the celebrant for the service. Leopold Richard, Jr., known as Leo to his family and friends, and as Papa to his grandchildren and great-grandchildren, was born in Eunice, Louisiana, on September 28, 1936, and was a resident of Lafayette, Louisiana for the past 57 years. He leaves to cherish his memory his loving wife of 63 years, Yvonne Bradley Richard; his seven children whom he always claimed were his “life’s greatest treasures”, Yvette Richard Champagne and husband, Dr. Kenneth, Monica Richard Domingue and husband, Harold, Lydia Richard Anderson and husband, Bill, Paul Jude Richard and wife, Elena, Celeste Richard Hebets and husband, Brad, Simone Richard Buys and husband, David, and Nicole Richard Barousse and husband, Brent; seventeen grandchildren, H. Lee Domingue III, Nicholas James Anderson, Dr. Bradley Paul Champagne, David Matthew Buys, Andrew Scott Domingue, Christopher John Champagne, Amanda Champagne Rehage, Laura Domingue Rafferty, Christina Hebets Toledo, Benjamin Paul Champagne, Hannah Renee’ Buys, Brittany Hebets Miller, Leo Paul Anderson, Tyler Matthew Buys, Adam Michael Barousse, Bonnie Margaret Barousse and Caroline Elizabeth Barousse; and four great-grandchildren, River Hugh Rehage, Samantha Alyson Buys, Matthew Kelly Rafferty and Rayne John Rehage. He was preceded in death by his parents, Leopold Richard and Laurie Manuel Richard, one sister, Dolores Richard Carruth, and one brother, John Richard. Leo and Yvonne grew up in Eunice, Louisiana, and were childhood sweethearts. Leo graduated from Eunice High School in 1954, where he and Yvonne made lifelong friends: Bert and Jackie Doise, Doug and Lucy McGee, Nell and Pat Vezina, and Naymond and Dodie Wooten. Following high school, he attended college at LSU for pre-med studies, and graduated from LSU School of Medicine in New Orleans in 1961. During his four-year residency in general surgery, he served in the U.S. Army National Guard MASH Unit. After completing his residency, he moved to Lafayette and was a practicing surgeon until 1974, at which time he moved his family to Dallas to specialize in colon and rectal surgery. He thereafter returned to Lafayette as its first colon and rectal surgery specialist and practiced until his retirement in 1992. During his years of practice, he was a member of the staff at Lafayette General Hospital and also at Our Lady of Lourdes Hospital, where he served as Chief of Staff. He served as President of the Lafayette Parish Medical Society, was a former member of the AMA, the American College of Surgeons, the American Society of Colon & Rectal Surgeons, and the International College of Surgeons. After retiring, Leo volunteered his services to Hospice of Acadiana for a number of years. Leo also became a board member of the Lafayette Public Library Foundation Board and served as its President. He and Yvonne were recipients of The Foundation Award in 2010 for their many years as sustaining supporters. While serving on the board, he formulated a plan for maintaining growth for the public library system. Leo also served as a member of the Board of Directors of the Acadiana Symphony Orchestra. Leo’s second career of sorts was learning about, and teaching, the technical aspects of the stock market. Over the years, he emailed dozens who expressed interest under the pen name “Forrest Notes” and gave advice on stocks and trading. When asked by some if they could compensate him, he simply suggested that they contribute to the Lafayette Public Library Foundation as “payment” for his services. In lieu of flowers, the family requests that any donations be made to Hospice of Acadiana or to Hospice of Acadiana Food With Love Ministry, 2600 Johnston Street, Lafayette, Louisiana 70503. Finally, the Richard family would like to thank Hospice of Acadiana for their comforting and compassionate care given to Leo that allowed him to spend quality time with his family until his passing. View the obituary and guestbook online at www.mourning.com Martin and Castille Funeral Home-DOWNTOWN, 330 St. Landry Street, Lafayette, Louisiana 70506, 337-234-2311 is in charge of funeral arrangements.

The family of Leopold Richard, Jr. M.D. created this Life Tributes page to make it easy to share your memories.

A Memorial Service will be held for Dr. Leopold Richard, Jr.,...