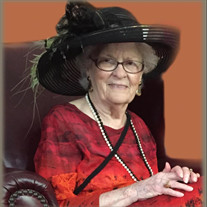 Funeral services will be held on Saturday, May 8, 2021 at 11:00 A.M. in La Chapelle de Martin & Castille in Lafayette, for Mrs. Eleanor Madeline Lazarus Hays, 92, who died on Wednesday, May 5, 2021 at her residence in Lafayette. Interment will be in Greenlawn Memorial Gardens Cemetery in Lafayette. Reverend Howard Blessing, will serve as Celebrant and conduct the funeral services. For family members and friends who are unable to attend on Saturday, May 8, 2021, at 11 A.M., the service will be live-streamed to a Memorial Facebook Group dedicated to Madeline L. Hays. To join the group, click the link below and then "join group". The video will appear on this group at service time 11:00 A.M. You may also share memories, pictures and condolences to the family in this group. Facebook link: https://www.facebook.com/groups/377100390236132/?ref=share Survivors include her two daughters, Mary Elizabeth Hays and her husband Tim Bennett and Susan Eleanor Wallace and her husband Greg; her five sons, William Magruder Hays and his wife Deedy, Robert Bruin Hays and his wife Jan, Thomas Leon Hays and his wife, Karren, David Swayze Hays and his wife, Jon-Ella, and John Patout Hays and his wife, Michelle; twenty-one grandchildren, Simon, Megan, Lily, Benjamin, Kathryn, Alex, Sawyer, Sarah Joy, Rosalie, Kristofer, Matheau, Peter, Laura, Mary, Jack, Madeline, Theresa, Michael Magruder, Anna, Katherine and Jonathan; twenty great grandchildren, Wesley, Julianne, Elise, Madison, Mollie, Samuel, Ava, Roman, James, Henry, Mary-Ann, Magruder, Hays, John, Isaac, Ethan, Marissa, Jaxson, Beau and Grayson. She was preceded in death by her beloved husband, Magruder Goldman Hays; her father, Leon Guice Lazarus; her mother, Eleanor Madeline Swayze Lazarus; and her granddaughter, Eleanor Hays Bennett. Eleanor Madeline Lazarus Hays was born in Baton Rouge, Louisiana on January 10, 1929, and raised in St. Francisville, Louisiana. She married her sweetheart, Magruder Goldman Hays on June 10, 1951 on a stormy day at Our Lady of Mount Carmel Catholic Church in St. Francisville, Louisiana. She was a Campfire Girl and participated in Louisiana Girls State. A Graduate of Julius Freyhan High School as Salutatorian in 1946 and LSU Baton Rouge in 1950 with a degree in Merchandising. She and Mac started their family in Lake Charles, moved to New Orleans for a few years, and have been in Lafayette since 1960. In 1962 and thereafter, she supported Mac in the opening and operations of Teche Electric Supply. Madeline was a dedicated volunteer for The American Red Cross most of her adult life. She began as a Red Cross swim teacher and advanced to the level of Water Safety Instructor Trainer. During that time, she also became involved with Red Cross Disaster Services. In that role, she traveled the country where she would be gone for weeks at a time to provide disaster aid to those in need. In recognition for her service, she was the first person in Louisiana to receive the Clara Barton Award for meritorious volunteer leadership on July 11, 1990. This is the highest honor the American Red Cross bestows on their volunteers. Her last assignment was working the Cajundome shelter for Hurricane Katrina at the age of 76. She was a proud member of The Descendants of the Jersey Settlers of Adams County, Mississippi. The original Jersey Settlers were made up of a church congregation from Chester, New Jersey. They were led by her 5th great-grandfather, Reverend Samuel Swayze, who left New Jersey and settled in what is now Kingston, Mississippi in 1773. This group formed the first Protestant Church in the Mississippi Territory. Hobbies included playing the piano and clarinet, traveling, dancing, going to the camp, reading, swimming and especially going to the beach. She and her husband were active members of the See Saws Square Dance Club and Krewe De Canaille for many years. She served as a Eucharistic Minister at Our Lady of Fatima Roman Catholic Church. Pallbearers will be her grandsons. Honorary Pallbearer will be Peter B. Hays, Jr., her brother-in-law. The family requests that visitation be observed in Martin & Castille's DOWNTOWN location on Friday from 4:00 P.M. to 8:00 P.M. and will continue on Saturday from 8:00 A.M. until time of services. A Rosary will be prayed on Friday by Brady LeBlanc at 7:00 P.M. in Martin & Castille Funeral Home. In lieu of flowers, the family encourages donations be made to the Hays Family Fund for charities at The Community Foundation of Acadiana, 1035 Camellia Boulevard, Lafayette, Louisiana, 70508. The family would like to express their sincere appreciation to her long term caregivers who brought her great joy, Kendra Potier, Desiree Potier, Carrie Taylor, and Sherrell Brown. View the obituary and guestbook online at www.mourning.com Martin & Castille-DOWNTOWN-330 St. Landry St., Lafayette, LA 70506, 337-234-2311

Funeral services will be held on Saturday, May 8, 2021 at 11:00 A.M. in La Chapelle de Martin & Castille in Lafayette, for Mrs. Eleanor Madeline Lazarus Hays, 92, who died on Wednesday, May 5, 2021 at her residence in Lafayette. Interment... View Obituary & Service Information

The family of Madeline L. Hays created this Life Tributes page to make it easy to share your memories.

Send flowers to the Hays family.