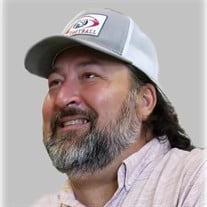 A Mass of Christian Burial will be held for Peter Eliot Graham at 2:00 PM on Monday, July 26, 2021 at St. Pius X Catholic Church of Lafayette. Peter was 48 when he passed at Ochsner Lafayette General Medical Center on Wednesday, July 21, 2021. The family requests that visitation be observed in Martin & Castille's DOWNTOWN location on Monday, July 26, 2021 from 9:00 AM until 1:00 PM with a recitation of the rosary at 11:00 AM by his father-in-law, Byron Bozeman. Interment will be in Calvary Cemetery. Reverend Howard Blessing will conduct the funeral services. Left behind to cherish his legacy include his treasured wife of 25 years, Monique Bozeman Graham; his son, Nicholas Eliot Graham; his favorite daughter, Camille Alexandra Graham; his son, Jake Eliot Graham; his son, Samuel Eliot Graham; his parents, Neil and Kim Barry Graham; his brother, Steven Graham and his wife Allison; his brother, John Charles Francis Graham; and numerous aunts, uncles, nieces, nephews, god-children, cousins and all others who he considered family. He was preceded in death by his youngest brother, Mark William Graham; his paternal grandparents, Woodman and Esther Graham; his maternal grandparents, Francis and Mildred Barry and his uncle, Granger William Graham. Born in Lafayette, the oldest of four brothers, Peter took his role as oldest as a life model. School age he played soccer, baseball, basketball then football and succeeded in all. Enrolling in ULL, he worked part time and ended up as a bartender at Poet’s, moving on to manager. After meeting Monique and marrying, and with babies coming, Peter went back to school with Monique’s support. Carrying his tiny babies like footballs, he studied, fed and diapered his three youngest, graduating in Finance with three watching. He worked for Walmart Distribution Center and then Wesco Distribution until his death. Peter was larger than life, a presence when he walked in a room. It wasn’t just his size, it was the vivaciousness that bumped up the atmosphere. His smile and his sincere concern won him many friends, and in that brotherhood bond he held them dear. On the golf course or in a boardroom, he was driven with compassion. His greatest blessings were his beautiful wife and their four children, appreciating every aspect of their lives. The world got so much smaller with his passing. Pallbearers will be his three sons, his cousins Eric and Nick King, and Dan Barry. A heartfelt appreciation is extended by the Graham family to the ICU staff of Ochsner Lafayette General for their compassionate care given to Peter. View the obituary and guestbook online at www.mourning.com Martin & Castille-DOWNTOWN-330 St. Landry St., Lafayette, LA 70506, 337-234-2311

A Mass of Christian Burial will be held for Peter Eliot Graham at 2:00 PM on Monday, July 26, 2021 at St. Pius X Catholic Church of Lafayette. Peter was 48 when he passed at Ochsner Lafayette General Medical Center on Wednesday, July 21, 2021.... View Obituary & Service Information

The family of Peter Eliot Graham created this Life Tributes page to make it easy to share your memories.

A Mass of Christian Burial will be held for Peter Eliot Graham...

Send flowers to the Graham family.