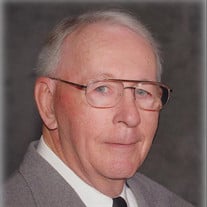 Private Graveside Services with full military honors will be held on Saturday, December 5, 2020 at 2:00 PM in Calvary Cemetery in Lafayette for Mr. Rodney C. Hamilton, Sr, 88, who passed away on Monday, November 30, 2020 at his residence in Youngsville surrounded by his family. The public is invited to pay their respects on Saturday, December 5, 2020 from 10:00 AM until 12:00 PM at Martin & Castille Funeral Home's DOWNTOWN location. In order to help keep the community safe we will honor the July 13, 2020 Louisiana Mandates. All families and their guests are required to wear a face covering and maintain social distancing at the funeral home. Thank you for understanding during this unprecedented time. Reverend Chris Fuselier Pastor of First Baptist Church of Youngsville will conduct the graveside service. Eulogist will be Dr. Jon “Skip” Palmintier. The Marine Corps League Acadiana Detachment 488 (Red Coats) will provide full military honors for the services. For family members and friends who are unable to attend on Saturday, December 5th, at 2:00 PM, the service will be live-streamed to a Memorial Facebook Group dedicated to Rodney Carroll Hamilton, Sr. To join the group, click the link below and then "join group". The video will appear on this group at service time 2:00 PM. You may also share memories, pictures and condolences to the family in this group. Facebook link: www.facebook.com/groups/Rodneychamiltonsr/ Rodney was born in Fort Worth, Texas on March 24, 1932. His family came to Lafayette in the summer of 1948, when only five other Hamilton families were in the phone book. God, family, country and community were his strong interests. In 1949, he joined the Marine Reserve at age 17 while attending Lafayette High School at the urging of his football coach, Lou Campbell. He served our country during the Korean War and was wounded in combat in September of 1951. As a result, Rodney was awarded the Purple Heart. Rodney loved the United States Marine Corps and was proud of all the Marines who served their country. Upon returning home in 1952, he married his high school sweetheart, Barbara Webb. He was a man of faith and was ordained as a Deacon; he is currently a member of First Baptist Church of Youngsville. He made numerous contributions to help make Lafayette a better place. Rodney was a member of the following organizations: Northside, Inc., Citizens of District A, Chamber of Commerce for 25 years, Bayou Vermilion District for 8 years, and Beaver Club since 1961. He served as a full-time elected official in the Lafayette City Government from 1968-1972 as a Trustee of Public Property (prior to our current form of City Parish Government.) His military involvement included: member of the Marine Corps League, the Military Order of the Purple Heart, and the Veteran’s Action Coalition of Southwest Louisiana where he served as Founder and Chairman Emeritus. Due to his efforts in helping to secure and build the Veterans Clinic in Lafayette, the street there was named in his honor. Rodney is survived by his best friend and the love of his life, his wife, Barbara Webb Hamilton; three sons, Rodney C. Hamilton, Jr. and his wife, Becky, Jeffrey W. Hamilton and his wife, Angie, and Carroll A. Hamilton; his two daughters, Rhonda H. Tortorich and her husband, Rory and Danna H. Privat and her husband, George. Rodney had twelve grandchildren, Jennifer H. Andries (Luke), Crystal H. Cart (Phillip), Rachel T. deMahy (Adam), Ryan Tortorich (Kara), Kate P. Stewart (Andrew), Claire Privat, Benjamin Privat, Britt Hamilton, Brook Hamilton, Alex Hamilton, Brooke Ayo, and Reid Hamilton. He also had eight great-grandchildren, Avery, Ethan and Eli Andries; Max, Stevie and Kyle Cart; Stella deMahy, and Tynleigh Ayo. He is also survived by his sister, Jeri H. Flynn; and sister-in-law, Faith O. Hamilton. He was preceded in death by his parents, Reverend Carroll and Myrtle Hamilton; his brother, Sam Hamilton; his sister, Norma H. Comeaux; and his brother-in-law, Phillip Comeaux. Pallbearers will be Rodney Hamilton, Jr., Jeffrey Hamilton, Carroll Hamilton, Alex Hamilton and Reid Hamilton. Honorary Pallbearers will be Carroll Baudoin, Douglas Bell, Andre Comeaux, David Comeaux, Ethan Flynn, Tom Grote, Mills Hamilton, Frank Mathews, Charles McGowen, Dr. Jon “Skip” Palmintier, Jack Patin, Ben Privat, George Privat, Gary Stahlhuth, Bob Tadlock, Rory Tortorich Ryan Tortorich and members of the following organizations: Beaver Club, The Marine Corps League, Military Order of the Purple Heart, and the Veteran’s Action Coalition of Southwest Louisiana. In lieu of flowers, donations may be made in Mr. Rodney Hamilton’s name to the following: Military Order of Purple Heart Chapter 504, 1330 N. Wilderness Trail, Carencro, LA 70520, The Marine Corps League Acadiana Detachment 488, PO Box 51703, Lafayette, LA 70505 or Veteran's Memorial at Lafayette Central Park, 2901 Johnston Street, Suite 304, Lafayette, LA 70503, https://moncuspark.org/donate; A heartfelt appreciation is extended by the Hamilton family to the staff of Grace Hospice for their compassionate care during this time. The family would also like to thanks the Marine Corps League Acadiana Detachment 488 (Red Coats) for the honor and support they have upheld throughout Mr. Hamilton's life. View the obituary and guestbook online at www.mourning.com Martin & Castille-DOWNTOWN-330 St. Landry St., Lafayette, LA 70506, 337-234-2311

Private Graveside Services with full military honors will be held on Saturday, December 5, 2020 at 2:00 PM in Calvary Cemetery in Lafayette for Mr. Rodney C. Hamilton, Sr, 88, who passed away on Monday, November 30, 2020 at his residence in... View Obituary & Service Information

The family of Rodney Carroll Hamilton, Sr. created this Life Tributes page to make it easy to share your memories.

Private Graveside Services with full military honors will be...