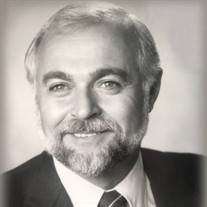 Funeral services will be held on Thursday at 2:00 PM in Martin & Castille's La Fleur de Lis Chapel in Lafayette, for Ronald Rene "Ronnie" Arceneaux, 77, who peacefully passed away on Monday, September 13, 2021 at his residence in Lafayette, with loved ones by his side. The family requests that visitation be observed in Martin & Castille's SOUTHSIDE location on Thursday from 10:00 AM until time of the services. A Rosary will be prayed by Edward Fremin on Thursday at Noon in Martin & Castille Funeral Home. Interment will be in Lafayette Memorial Park Cemetery. Reverend Msgr. Keith J. DeRouen will conduct the funeral services. Left to cherish his memory include his wife of 59 years, Bootsie Cella Arceneaux; two daughters, Joan A. Fatheree and Judith A. Boudreaux and her husband, Kevin; one son, Ronnie Arceneaux, II and his wife, Dawn; grandchildren, Jason Fatheree and his wife, Maggie, Sarah Fatheree, Mallory Boudreaux and her fiancé, Jacob Prejean, Drake Boudreaux, Grant Arceneaux, Carter Arceneaux, Tucker Arceneaux; and great grandchildren, Avery Rose Prejean and Leighton Grace Prejean. Ronnie was preceded in death by his parents, Pete Arceneaux and Ruth Suarez Arceneaux Bienvenu; and one sister, Judy A. Truesdell. Ronnie was best known for his beautiful smile, his pretty eyes, his smooth moves on the dance floor, but mostly his love of life and his family. He was a graduate of Lafayette High Class of 1961 and Northwestern State University, where he earned his Masters in Engineering. He was a veteran of the United States Army and was very proud of his service. Ronnie served on the Board of Directors for the Lafayette Town House, was a member of the Krewe of Gabriel, Order of the Troubadours and Les Brigands de Lafitte. He was King Laccassine for the Krewe of Attakapas in 1997. Ronnie was a member of the Petroleum Club and participated in LAGCOE. He was President of the PTC at Lafayette High in 1991. Ronnie spent many years coaching his son "Little Ronnie" in various sports. The positive impact he had on his players and assistant coaches will be forever remembered. He loved hunting and fishing and being at the camp. He loved a good band and a cold beer, but mostly, he loved his family. Ronnie lived to watch his grandchildren play whatever sport they were participating in and did so practically up until the time of his death. After his diagnosis, his only wish was to be able to watch his grandson play football his senior year at STM, and watch his grandson Jason, marry the love of his life, both of which he was able to do. His children, his grandchildren and great grandchildren were his passion as was his wife, Bootsie. Pallbearers will be Ronald R. Arceneaux, II, Kevin P. Boudreaux, Jason P. Fatheree, Drake S. Boudreaux, Grant R. Arceneaux, Carter J. Arceneaux, Tucker R. Arceneaux. Honorary Pallbearers will be Britt Busch, Bill Bass, Ollie Cordil, Bill Butcher, Norman Roy, Billy Stevenson, David Kelly. Memorial contributions can be made in Ronnie's name to the Miles Perret Center. A heartfelt appreciation is extended by the Arceneaux family to Nursing Specialties Home Health and Hospice and a special thanks to Tiny, who had the ability to make Ronnie laugh during his roughest times. View the obituary and guestbook online at www.mourning.com. Martin & Castille-SOUTHSIDE, 600 E. Farrel Road, Lafayette, LA 70508, 337 984-2811.

Funeral services will be held on Thursday at 2:00 PM in Martin & Castille's La Fleur de Lis Chapel in Lafayette, for Ronald Rene "Ronnie" Arceneaux, 77, who peacefully passed away on Monday, September 13, 2021 at his residence in Lafayette,... View Obituary & Service Information

The family of Ronald Rene "Ronnie" Arceneaux created this Life Tributes page to make it easy to share your memories.

Funeral services will be held on Thursday at 2:00 PM in Martin...