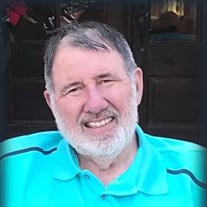 Funeral services will be held on Thursday, November 11, 2021 at a 1:00 pm Liturgy of the Word in Martin & Castille's La Fleur de Lis Chapel (600 E. Farrel Rd.) for Ronald Joseph Berger, 72, who passed away on Saturday, November 6, 2021 at Thibodaux Regional Medical Center. The family requests that visitation be observed on Thursday from 9:00 am until time of service. A Memorial service in Thibodaux will be held at a later date. Interment will be in Lafayette Memorial Park Cemetery at 2111 W. Pinhook Road. Reverend Andrew Schumacher, Pastor of St. John the Evangelist Catholic Church in Mermentau, will conduct the funeral services. Survivors include his wife of 47 years Stephanie Hensgens Berger; son Stephen Berger and wife Teri; three sisters, Geraldine Cancienne, Deborah Hagen (Bob), and Pamela Brignac; one brother, Chris Berger; two brothers-in-law, Anthony Hensgens (Pam) and Karl Hensgens, and one sister-in-law, Michelle Hensgens; and numerous nieces and nephews and great nieces and nephews. He was preceded in death by his parents, Elmo and Lily Mae Gros Berger; paternal grandparents, Eddie and Louise Hebert Berger and maternal grandparents, Eusebe and Mable Ledet Gros; one sister, Susan B. Estevens; his parents-in-law, Nicholas Anthony Hensgens, Sr. and Gloria Deshotels Hensgens; brothers-in-law Rick Estevens, Carey Brignac and Kenneth Hensgens; and one sister-in-law Melanie Hensgens. Ronald was born and raised in Thibodaux, LA and proudly lived there all of his life. He was a graduate of Thibodaux High School Class of 1967. He entered the United States Military in 1969 and served in the Vietnam War - TC SP4 US Army - from 1970 - 1971. He is a decorated veteran and received several commendations including the Bronze Star. Following his military service, he returned to Thibodaux and worked at various lumber companies, majority of the time at Frost Lumber Company. He was actively involved in the Terrebonne Genealogical Society and served as both vice president and board member. He was a member of the LaFourche Heritage Society and served as vice president as well as a proud member of the Thibodaux American Legion. He was awarded the "Outstanding Veteran of the Year" in 2014 for the Lafourche Community on Disability issues. In his retirement years, he was a songwriter/musician and produced many songs. He had many cherished friendships throughout his life. Pallbearers will be Joseph A. Hensgens, Nicholas Anthony Hensgens, III, Thomas R. Hightower, III, Ryan Estevens, Scott E. Breaux, Wyatt D. Breaux, and Jake E. Breaux. Memorial contributions can be made in Mr. Ronald Joseph Berger's name to the Wounded Warrior Project, www.support.woundedwarriorproject.org. A heartfelt appreciation is extended by the Berger family to Jennifer Knight, Ronald's wonderful caregiver. View the obituary and guestbook online at www.mourning.com Martin & Castille-SOUTHSIDE-600 E. Farrel Road, Lafayette, Louisiana 70508, 337-984-2811

Funeral services will be held on Thursday, November 11, 2021 at a 1:00 pm Liturgy of the Word in Martin & Castille's La Fleur de Lis Chapel (600 E. Farrel Rd.) for Ronald Joseph Berger, 72, who passed away on Saturday, November 6, 2021 at Thibodaux... View Obituary & Service Information

The family of Ronald Joseph Berger created this Life Tributes page to make it easy to share your memories.

Send flowers to the Berger family.