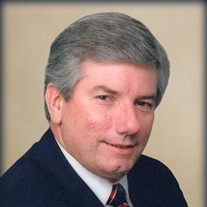 Memorial services will be held on Saturday, May 14, 2022, at 2:00 pm at The Episcopal Church of the Ascension in Lafayette for Timothy John McNamara, age 84, who died peacefully at home on May 4, 2022. Born and raised in New Orleans, Louisiana, to the late John Thomas and Claire Panter McNamara, he was the eldest of their three sons. Tim was a proud graduate of Jesuit High School in New Orleans and LSU in Baton Rouge for undergraduate and law school. His lifetime love of all things LSU was renowned, and while able, he attended every single football game in Tiger Stadium, no matter the weather, always proclaiming, "it never rains in Tiger Stadium," and any precipitation was mere "Tiger sweat." The Reverend Joseph Daly, Rector, will conduct the funeral services. Private family inurnment will be in Calvary Cemetery. Left to mourn his passing are his beloved wife of 33 years, Sarah Elizabeth McNamara; his daughters and their families: Maura McNamara Nelson and husband Chase of Lafayette, LA; Sheila McNamara Greenwood and husband Beau of Alexandria, VA; Kitty McNamara Carnahan and husband Ira of Chevy Chase, MD; a son, T.J. McNamara of Austin, TX; his "fourth daughter" Nicole Bouligny Brown of Lafayette, LA; and former daughter-in-law, Susan Hackman McNamara; his six grandchildren, Swepson Wright Nelson, Joseph Marshall Nelson, A.B. "Tripp" Greenwood, III, Callie Frances Carnahan, William Woodfin Carnahan, Robert John McNamara; and his cousin James Kinabrew Williams, whom he always considered a big brother. His wife's family also survives Tim: Nadine Shaw, his mother-in-law of Choctaw, OK; brothers and sisters-in-law Paul and Julie Whitney of Richland, WA, Dan and Suzanne Whitney of Richmond, TX, and Sam and April Whitney of Richmond, TX; Amy Whitney and Joe Dirnberger of Long Beach, MS, Beth and Corey Chenoweth of Fort Worth, TX, Meg and Robert Gentry of Arvada, CO, and Jo Whitney of Choctaw, OK; along with numerous nieces and nephews. He was preceded in death by his parents and younger brothers, Bobby, and Pat McNamara. Tim practiced law for over half a century and was a founding partner of what is now The Onebane Firm. He was a fierce litigator known for his tireless and thorough advocacy for clients. Appropriately, he was one of the inaugural inductees into the Lafayette Parish Bar Association's Hall of Fame and awarded the Martindale-Hubbell A.V. Preeminent ranking by fellow Bar members annually for nearly three decades. He was also a Founding Member of the LSU Law Center's National Alumni Board, a member of the Fifteenth Judicial Bar Association, the Louisiana State Bar Association, the Louisiana Association of Defense Counsel, the American College of Trial Lawyers, and the American Board of Trial Advocates. His many years of insurance defense counsel made him a risk expert but a fun-sucker at home to his children, regularly rejecting any pleas for trampolines, mini-bikes, swimming pools, or tree forts with the incredulous retort, "Do you know what the liability is on something like that?" As a native New Orleanian, Tim enjoyed Carnival season and was a member of the Krewe of Gabriel, serving as a Royal Duke, and riding Float #13 with his same group of friends for decades. He loved seeing the children, the costumes, the marching bands, and friends along the parade route. Other social clubs included the Lafayette Town House, Oakbourne Country Club, a founding member of the Lafayette City Club, and the Petroleum Club. Known as "Big Daddy" by his grandchildren, he was always larger than life. Things he truly loved (in no particular order) included: telling a great story, his family, the practice of law and especially Onebane Law Firm, Friday night at La Fonda, his Irish heritage, Irish coffee with crème de menthe, boiled crawfish, a good martini, tennis, anything positive about his adopted city of Lafayette, historical novels, the ASH father-daughter banquet, his Buick Riviera convertible, LSU football, paprika, duck season, and bragging about his grandchildren. But above all, he cherished and loved his wife, Sarah, even overcoming his lifetime disdain for the musical "Oklahoma" as an homage to her home state. A lifelong voracious reader, Tim believed that education and the pursuit of knowledge were critical to life's success. He volunteered his legal talents at Ascension Day School, Our Lady of Fatima, and the Academy of the Sacred Heart (ASH), where he also sent his three daughters. Tim was passionate about ASH and felt that its focus on integrity, female leadership, and education matched his desire to raise smart, independent, and thoughtful young women. As such, for those who wish to memorialize Tim's life, in lieu of flowers, the family kindly requests donations in his name be sent to the Academy of the Sacred Heart (P.O. Box 310, Grand Coteau, LA, 70541). Perhaps his life's beliefs are best expressed in this Bible verse from the Book of Timothy, his patron saint and namesake: "I have fought a good fight, I have finished my course, I have kept the faith." (2 Timothy 4:7) Honorary pallbearers will be Thornton Chase Nelson, Allen Burton Greenwood, Jr., Ira Woodfin Carnahan, Swepson Wright Nelson, Callie Frances Carnahan, Joseph Marshall Nelson, William Woodfin Carnahan, Allen Burton Greenwood, III, and Robert John McNamara. The family would like to extend their appreciation, acknowledge, and thank longtime caregivers Beatrice Mouton and Jasmine Alfred and Hospice of Acadiana for their outstanding care of Tim. The family requests that visitation be observed in Coughlin Hall at The Episcopal Church of the Ascension, 1030 Johnston St. Lafayette, LA 70501, on Saturday, May 14, 2022, from 11:30 am until time of services. A reception will be held at the Nelson residence immediately following the services. View the obituary and guestbook online at www.mourning.com Martin & Castille-DOWNTOWN-330 St. Landry St., Lafayette, LA 70506, 337-234-2311

Memorial services will be held on Saturday, May 14, 2022, at 2:00 pm at The Episcopal Church of the Ascension in Lafayette for Timothy John McNamara, age 84, who died peacefully at home on May 4, 2022. Born and raised in New Orleans, Louisiana,... View Obituary & Service Information

The family of Timothy John McNamara created this Life Tributes page to make it easy to share your memories.

Send flowers to the McNamara family.