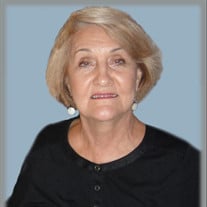 On Monday, December 6, 2021, Yvonne Neal Wright (85) began her heavenly eternal life with God Our Father. Yvonne was born April 9, 1936, in Blountsville, Alabama and resided in Lafayette, Louisiana. For most of her adult life, she resided in south Louisiana between Houma, New Iberia and Lafayette married to her late husband George W. M. Wright, Sr. and raised four children: daughter, Cynthia Wright Shahkarami and husband Amir of Acworth, GA; son, George (Bill) William Morgan Wright, Jr. and wife Patti of Murfreesboro, TN; daughter, Nina Wright Faucheaux of Baton Rouge, LA; and son Christopher Neal Wright and wife Pam of Murfreesboro, TN. Known as Mama Von, she was loved by her eight wonderful grandchildren and their spouses: Sean Shahkarami (wife Tipa), Eric Shahkarami, Lance Faucheaux (wife Ashley), Blake Faucheaux (wife Maria), Ashley Faucheaux, Patrick Wright, Elizabeth Wright and Mary Grace Wright. Yvonne was a loving, caring wife, mother, grandmother, sister, and friend. She always had a passion for learning and embraced new challenges with a focus and determination to succeed. While raising her children, Yvonne found time to enjoy a variety of sports, sell beauty products, help in her children’s scouting programs, stay involved in her church, and even obtain her pilot’s license. Later, she pursued and became a licensed hairstylist and used her creative talents working in the interior design field. Growing up on a farm in north Alabama, Yvonne applied her skills and love for gardening in every home she owned. Later in her life, she focused her passion around her Christian faith by earning a Bachelor’s Degree in Theology. Yvonne also faced challenges in her life. She lost her first husband, US Navy pilot Andy Goodwin, during a tour of duty in the Mediterranean. As a newly widowed mother of a young daughter, she moved to Louisiana to start a new life. Here, she later met and married her late husband, George. Yvonne suffered a stroke in 1992 that paralyzed her right side. Her strong faith is what kept her alive because God had more plans for Yvonne. She not only persevered in living with this disability with daily physical therapy to keep her body strong, but also provided encouragement to many other stroke patients in her area. She is preceded in death by her two husbands Andy in 1959 and George in 2010; along with her father Eugene Garnet Neal, her mother Louella Privett Neal, older sister Ruth Rhodes, older brother Arlin Neal and younger brother Frank Neal. She is survived by younger brother Harold Neal and younger sisters, Nettie Nix, Bobbie Scott, and Linda McClellan. As she rests in eternal peace with God Our Father, we know Yvonne sends her love from heaven to her family and many friends here on earth. A Celebration of Life for Yvonne will take place on Saturday, January 8, 2022, at Martin & Castille Funeral Home, 600 E. Farrel Road in Lafayette. Visitation will be from 9am–11am followed by services starting at 11am. A private burial will take place later with immediate family in New Iberia. View the obituary and guestbook online at www.mourning.com Martin & Castille - SOUTHSIDE, 600 E. Farrel Road, Lafayette, Louisiana, 70508. 337-984-2811

On Monday, December 6, 2021, Yvonne Neal Wright (85) began her heavenly eternal life with God Our Father. Yvonne was born April 9, 1936, in Blountsville, Alabama and resided in Lafayette, Louisiana. For most of her adult life, she resided in... View Obituary & Service Information

The family of Yvonne Neal Wright created this Life Tributes page to make it easy to share your memories.

Send flowers to the Wright family.